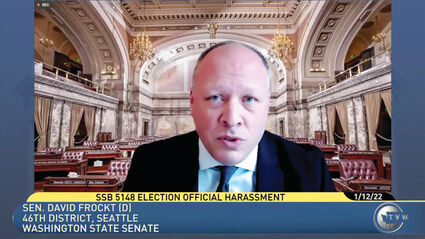 Election officials will get more protection from harassment if SB 5148 becomes law.

The bill was approved in the Senate Jan. 12 with 48 yeas and 0 nays. It will be up to the House to approve or amend it.

In debate on the Senate floor, Sen. David Frockt, D-Seattle, said the bill will address a “grievous threat” to our democratic system.

“Here in our own state, in Washington State, which inspired this legislation last year, the top elections official, a deputy to our former Secretary of State had her name and home address posted online with her picture in crosshairs and the threat, ‘your days are numbered’” said Frockt. He pleaded with fellow senators to vote in favor of this bill to show that this state’s Legislature will no longer tolerate this behavior.

“If we don't stand up for them, we run the risk of not standing up for the democracy in this state, and we may go down a road that we will soon regret,” Frockt said.

Frockt’s bill proposes new protections for all election officials. Any official employed by the Secretary of State or a county auditor's office will have an added layer of protection from harassment. The bill elevates the crime of harassment to a class C felony. If SB 5148 becomes law, any harassment directed at elected officials would be punishable by up to five years in jail and/or a fine of up to $10,000.

The Washington State Journal is a non-profit news website operated by the WNPA Foundation. To learn more, go to wastatejournal.org.