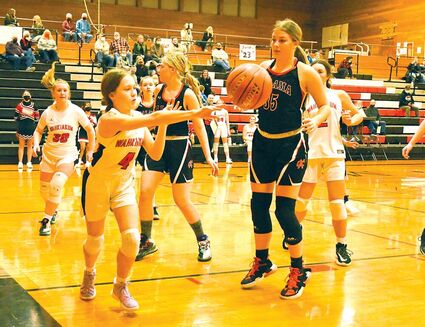 Mule Jessie LaFever brings feeds an offensive rebound in their 63-16 win over the Kalama Chinooks on Tuesday.

The Wahkiakum Mules girls basketball team continues to dominate with two more wins this week, bringing their record to 12-4 overall and 6-0 in league.

The team traveled to Toutle Lake on Thursday and easily beat the Ducks 59-17.

"I thought the girls played great aggressive defense all the way through the game against Toutle," Coach Rob Garrett said. "The girls also attacked the basket hard, which has been a big focus. Reigha [Niemeyer] and Megan [Leitz] in particular were slashing to the hoop at will."

The Lady Mules hosted Kalama on Tuesday and won 63-16.

"I was impressed with our talking on defense," Coach Garrett said. "The girls also were able to execute a few new plays they had never practiced before which was great to see. Courtney [Carlson] used her eyes to manipulate the defense in order to get her teammates easy looks. Miya [Kerstetter] had a great game offensively and Emmie [Niemela] had a solid, all around game."

The team travels to Napavine today (Thursday), where Garrett expects to see a little more competition, and host Stevenson next Tuesday.