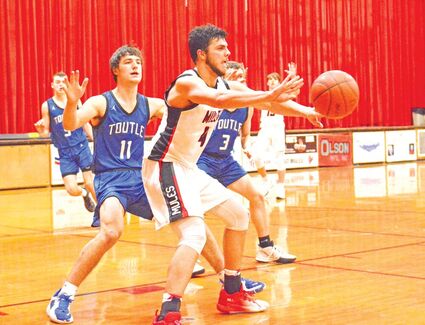 Dominic Curl makes a pass for the Mules in their win over the Toutle Lake Ducks.

The Wahkiakum Mules boys basketball team added two wins this week bringing their overall record to 8-4 and their league record to 3-1.

The Mules managed to hold on to a late lead in Toutle Lake on Thursday to beat the Ducks 53-50.

"Both teams got out to a slow start offensively," Coach Todd Souvenir said. "We struggled to get into any kind of rhythm throughout the game, but in the fourth quarter, luckily, we got things going and got a couple shots to fall and got some momentum and ended up scoring 19 points to come up with a three point win. I thought we did a good job of being consistent and staying confident."

On Tuesday, the Mules scored 32 points in the first quarter of their game against the Cardinals in Winlock and never looked back, winning easily 80-21.

"We got off to a good start offensively, got some steals and easy buckets," Coach Souvenir said. "Everybody got some playing time and had a lot of fun. I was proud of the guys for that.

"I thought Kyler [Sause] did a good job of seeing the open guy. They played a zone and got the ball up the middle and got Dom [Curl] a lot of clean looks."

The Mules travel to Kalama Wednesday and host Napavine on Friday.