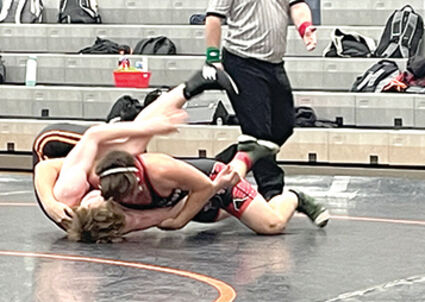 Senior Jerimyah Johnson throws his opponent to the mat for the takedown. Courtesy photo.

Wahkiakum High School wrestling returned to the mats after a long hiatus due to winter break and tournament cancellations from covid-19.

The Mules opened up Central 2B League play, having not competed since Dec. 11. On Jan. 12, the team traveled to Rainier High School for a league mixer and dominated with a 9-3 team record, all wins coming via pin.

"It was great for our student athletes to not only get back on the mats after the disappointment of cancellations, but do so in league matchups that matter," commented Assistant Coach Josh Miller.

Senior Cayden Mendez continued where he left off in December with decisive victories against opponents. Returning to the mats after injury, Senior Gabe Moon wrestled for the first time this season grabbing his first victory by pin. 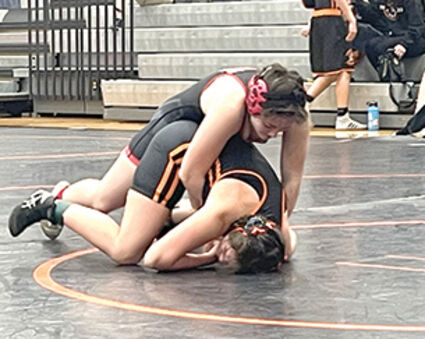 Sophomore Lily Hale works her opponent for from the top and looks to get the pin. Courtesy photo.

Girls Wrestling, looking to defend their title of District Champions, continued to put the league on notice. Junior McKenna Mendez, sophomore Lily Hale, and freshman Zaya Ray all were victorious in their matches with wins by pin.

Mules continued the dominance this past Tuesday, traveling to Kalama for another league mixer. This go around, every wrestler had at least one victory. This includes first year wrestler, junior Teo Roch grabbing his first victory of the year. The team left the mixer with a group record of 11-4 in the match-ups, with many wrestlers remaining undefeated in league play.

"It felt great to get back into the swing of things and see our team do so well" said senior Jerimyah Johnson. "Now, we just need to keep the momentum rolling in our next meet and on to district playoffs."

The Mules will travel to Adna and Ilwaco next week to end the regular season before district playoffs begin in February.