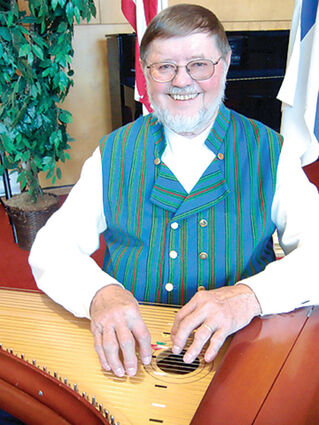 Wilho Saari with a kantele. Courtesy of Finlandia Foundation.

For Naselle's Finns, Wilho Saari has always been one of the most valued citizens. A fifth generation Finn, he was not only a good husband, father, grandfather and great grandfather, he was the prime example of a fine son of Finland and its traditions. Wilho taught music in the school for many years. The tradition bearer of the Finnish Kantele from Naselle, Washington, is Wilho Saari. He can trace the love of kantele playing back five generations in his family. His great-great grandmother, Kreeta Haapasalo, is one of Finland's notable kantele matriarchs, a kantele-heroine, as she is often called. Saari's degree in music has helped him to develop outstanding skill in teaching himself to play kantele later in life. At age 50 Wilho started to teach himself the kantele. And his career as a performer with the kantele started from there.

Saari received a Washington State Governor's Heritage Award for his work popularizing and teaching kantele. In 2006, Saari was honored with a National Endowment for the Arts Heritage Fellowship, the country's highest honor in folk and traditional arts. He was also a very productive composer of kantele music with over 2,400 pieces written. In 2010, Dr. Arja Kastinen from Finland published 365 of Saari's compositions in a collection called "Tune-a-Day." Saari recorded two CDs on the kantele.

The following is a tribute to Wilho, as written by Kylie Updike, his granddaughter, just before he died.

As I anticipate the passing of my dear Ukki, I can't help but stare at my own quirky fingers and how they curve and lean in the same odd directions as his. My memories of Wilho Saari are countless, and yet, every image has completely revolved around his iconic crooked hands.

I've thought a lot about how his hands tickled whimsical music on the kantele, piano, organ, and baritone. And how he was given both state and presidential awards for his kantele playing. He spent retirement writing hundreds, if not thousands of simple songs in what he referred to as a "tune-a-day." But what always impressed me most were the unpretentious kantele concerts he'd give on late summer afternoons in front of his house. Sometimes, we'd find stray neighborhood children sitting to listen. He'd nod gently and proudly when they'd clap for him, only to dabble yet another friendly tune at their encore.

His gentle playing nearly mirrored the way he'd pat our shoulders upon greeting and leaving. His touch was friendly, light, and brief, like a bubble popping. Always short, but never without warmth. "Come again!" he'd say as we left, and he'd wave us off pretending to cry with a handkerchief. He gave many people, family and strangers alike, the opportunity to come and come again. His home, beds, and sauna were always open. He once even let a traveling homeless man use his sauna, gesturing excitedly towards the door with, again, those hospitable crooked hands.

Ukki's crooked hands were nearly always comfortably folded across his soft belly. He did this while taking quick power naps that were always accompanied by very specific breathing patterns that our family can imitate perfectly. His hands were also folded while he'd tell one of his many go-to stories or jokes, always using the same words and timing and inflections, like clockwork. We never could decide what was funnier - the actual joke, or that each of us knew the punchline before it was ever said.

Growing up, Ukki's hands were often paired with money for the movies, or vanilla ice cream for a grandchild on a hot summer's day. He seemed to grow younger as he grew older - developing a child-like awe for every simple part of life. Apple juice, brown sugar, 500 piece puzzles and sudoku... or even learning and relearning that he has great-grandchildren, as he waved enthusiastically at my daughter, Kaisa, through the Pig-n-pancake window. "My great-granddaughter? How about that!" Ukki was open-minded, open-hearted, and open-handed, always meeting anything new with total delight.

My Ukki's crooked hands gave generously to those he loved - but who didn't he love? We couldn't take him anywhere without his coming across old friends, or talking to a stranger like they were already old friends. Either way, they always left as friends. Even with the decline of his own memory, people always knew his name. Even though he had forgotten theirs, they never forgot his. He was a friend to all, always.

But I will say, my most distinct memories of his crooked hands, were the way he'd place them on his forehead, when he'd bow to pray. His prayers were always simple and sincere, and often said in Finnish. I am the most grateful for these hands. These prayerful hands gave our family a strong foundation for our own faith. And I hope to one day, imitate the gentleness, playfulness, generosity, and faith that Ukki's crooked hands showed during his long and most-fulfilling life.

I do have his hands, after all.