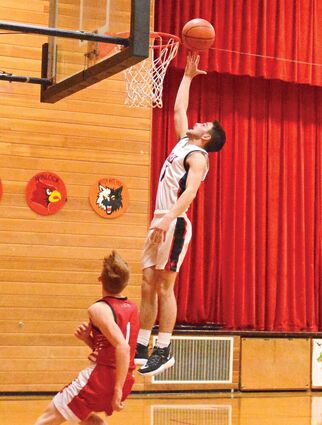 Mule Braden Avalon goes up for a layin in the Mules' win over Toledo on Monday.

The Mules split games on Monday and Tuesday, bringing their overall record to 9-7, and 4-4 in league.

On Monday, the Mules beat Toledo in front of a home crowd 62-61.

"It was our first game after our week off, it was definitely a sloppy game, but it was competitive the whole way," Coach Todd Souvenir said. "We moved the ball and got some open looks and Zakk [Carlson] knocked down a three point shot with 19 seconds left to give us the lead. It was a really big win, and more than anything a game to get our feet back underneath us. It was a good night for Dom [Curl] to step in and do a lot of good things to help us get the win. We've definitely got to get better on the boards."

"Adna is a very talented team," Coach Souvenir said. "They play hard and can shoot the ball from all five spots and play really good defense. We knew it was a challenge coming in and the guys really stepped up, scoring 24 points in the first quarter. They switched to a zone defense, which we struggled to adjust to. In the second half we buckled down defensively and got ourselves back in the game, I think we tied it up at 49 at one point. In the last three minutes of the game, they took control."

Still, one thing was clear to Souvenir. The Mules could compete with anyone in the league on a given night. 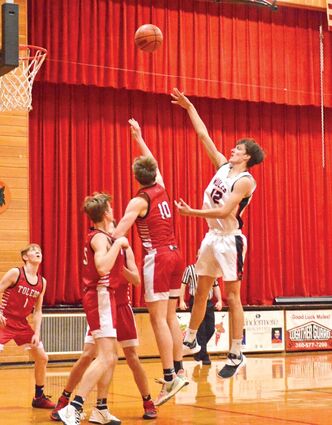 Titan Niemela puts up a shot over the Toledo defense.

"I was proud of the guys tonight," he added, "from a rebounding standpoint we really battled and didn't give Adna a lot of second chance points, and defensively, it was probably our best game of the season."

District games begin on Saturday but the Wahkiakum Mules boys basketball team has one more regular season game to play in Morton/White Pass tonight (Thursday). Check the Wahkiakum Eagle Sports Report page on Facebook for scores and updates on the district tournament.