WHS students take it to the Supreme Court 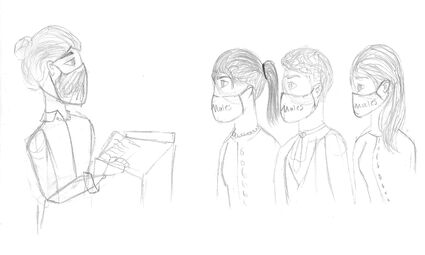 Wahkiakum High School student Abigail Ames made her case before U.S. Supreme Court Justices recently in a mock trial held in teacher Don Cox's classroom. Because no cameras are allowed, the courtroom sketch was provided by another WHS student, Finn Kleinhans.

Half of the class took the role of appellants and the other half were respondents, arguing a case that made it all the way to the U.S. Supreme Court in 1857: Dred Scott vs. Sanford.

"This was a big court case," Cox said. "It was a test case. It was seeing if the country was ready to really deal with the issue of slavery, three or four years before the Civil War."

"They were arguing whether he should be free," one student explained.

"They were also arguing whether he had a right to stand in a courtroom because he was a slave," said another. "It was basically a big citizenship argument."

"Because he was Black, the courts declared that he had no standing. He was not even a citizen and non-citizens do not have standing in the U.S. Supreme Court," Cox said.

"We had to do a lot of research, stuff on the constitution that was related to his case, and information that wasn't past 1856 or 1857," Abigail Ames said. "We looked at cases that happened before the Dred Scott case as evidence for our sides."

Two of the students on the respondent side, Allyssa Montgomery and Adriana Ashe balked at their assignment, Cox said. Their job as respondents was to defend the institution of slavery.

We can't do this, they told him.

"But they did, and they did a great job," Cox said. "All the respondents felt that way. They were just the most vocal. It's very difficult to argue for a position you don't personally believe in and you can't ethically support."

While Ashe initially struggled to find any kind of reasoning to support a position for slavery, she eventually found value in the research.

In the mock trial, students were able to rely on arguments made in the past, regardless of which side they were on, but they were also able to use justifications of their own.

Historically, Dred Scott lost his case. In Mr. Cox's classroom in January, Scott had a better outcome when the judges voted 2-1 in his favor.

Eddy described the scene. The students were dressed up, prepared with note cards, and a little nervous as they presented their arguments.

"I had a hard time interrupting them and asking them questions which is what a Supreme Court Justice should do," Eddy said. "That's what surprised me, that I felt bad for interrupting the students."

"I was impressed by their preparation," she added.

Would she do it again? You bet.

"I wouldn't be a lawyer today if other people hadn't been a role model for me," Eddy said. "So yes, any chance to interact with students."

The mock trial was a new experience for most, if not all of the students. Wyatt Bruntmyer's only encounter with a courtroom came from an old film,12 Angry Men.

"Being a part of one, I saw how things worked," Bruntmyer said.

And one student, Whitney Williams, is considering a future in law.

Special thanks to Don Cox and the students who participated in the mock trial including Abigail Ames, Adriana Ashe, Wyatt Bruntmyer, Allyssa Montgomery, Emerald Niemela, and Whitney Williams for their contributions to this conversation.