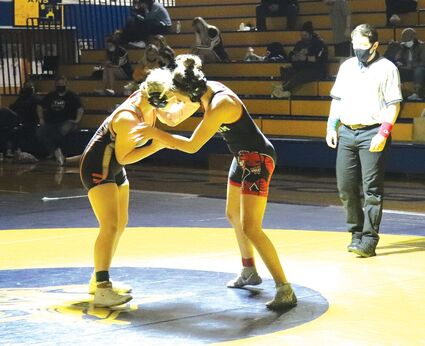 Mule Wrestling came off a disappointing end to their regular season being cut short by Covid-19 protocols and powered through district championships.

Throughout this season wrestlers were scheduled to participate in an additional 3 tournaments and 1 league meet that simply didn't happen due to cancellations and a program pause.

"We didn't get the number of matches we wanted to this season," said coach Garrett Radcliffe. "I was still very proud of the discipline our wrestlers showed. I talked to other coaches whose programs were shut down multiple times due to outbreaks. We were able to hold out until the last week, while others were being taken out all season," he added.

"It's certainly frustrating, but it's no excuse. We still have to work hard and when we do have matches, we must perform," commented Sophomore Lily Hale.

And perform the Mules did. Six of the seven active team members will be moving on to regional playoffs in a bid to move on to the state championship at the Tacoma Dome later this month.

Results from the District Championship were:

Regional competition will take place this Saturday with the boys traveling to Adna and the girls returning to Aberdeen.