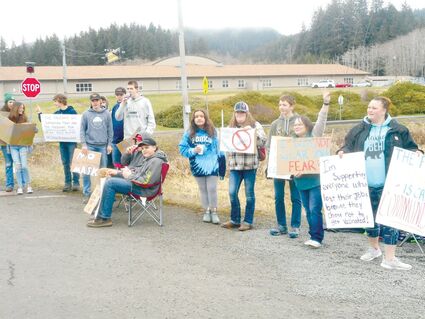 The first day, Tuesday, Feb. 8, was a state wide day for protesting. It started with the protestors setting themselves up inside the courtyard parking area where children are dropped off for school behind the building.

With the protestors making noise, shaking their signs and standing outside the windows and looking into the classrooms, the disturbance was palpable for both teachers and students, whether inside or outside. There were reports of some protestors pounding on windows from outside.

District Superintendent Lisa Nelson was concerned for the stress on teachers and fear among the students. As the young children arrived for school, several didn't want to go inside because of the chaos in their way. It made it difficult for teachers to teach.

Eventually, law enforcement arrived and the group was moved further away from the school building.

On the second day, Wednesday, Feb. 9, the group continued their protesting across the highway at the intersection of SR 4 and SR 401. Their presence was not a hindrance for the children in school that day. Some drivers honked their horns in support of the protesting, while others driving by were concerned for the students who were standing very close to the edge of the road. Quite a few high school students were in the group for the two-day protest, thus missing school. That was the choice of the parents, and the day had been advertised as a day for students to protest, so that was not unexpected.

The protestors were somewhat aggressive the first day but reasonable the second day. As cars passed them, the group yelled remarks that indicated their anger was not with the governor or any state officers. Rather, it was toward the school board and the superintendent. There were numerous issues being addressed with signs and yells that came from those participating both days.

While protests are fully legal, behavior during the protests can lead the public to wonder if they planned it to be chaotic or if they had received any training in how to protest without yelling or being offensive. For Naselle's area it was an event that will be remembered because events in the area are usually mannerly and respectful.

Since last August, some parents and visitors at the school board meetings have been angry and showed it at the meetings. The board did not change their decision to require masks, though they were asked to do so many times.

It appears that over the past two years, frustration and anger from covid-19 have built to the point that parents with homebound children and youth have decided to place blame on the board's decision to follow the state's mandate for masks while in school.

Sports then began, and the frustration boiled over even more. Following the model of other entities using Zoom for their meetings, the school purchased new equipment to make it possible for the board to have virtual meetings. The equipment was installed and tested at last month's meeting. It worked well, so the following meeting on Tuesday was offered to the public through both Zoom and telephone. Either way, members of the public can speak up at public comment time on the agenda. See the information for connecting on the district's website.