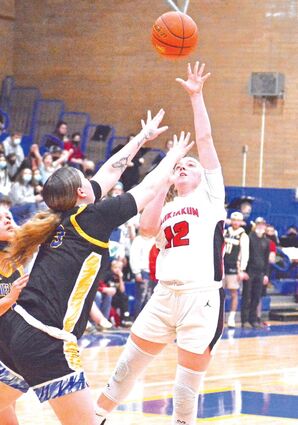 Miya Kerstetter puts up a shot for the Mules.

The Wahkiakum Mules girls basketball team pulled ahead of Chief Leschi early in their district semifinal game on Tuesday, but the Warriors picked up momentum in the second half and a last second shot put them over the Lady Mules 40-38.

"It was a hard fought game, and no doubt about it, it was a heartbreaker for us," Coach Rob Garrett said. "We led the entire game until there was one second to go. The girls worked extremely hard, unfortunately it just didn't go our way tonight. One bounce here or there and we win that game. It's a tough one to swallow, but I'm proud of how hard these girls battled and we will bounce back quick."

The Lady Mules will now face Rainier tonight (Thursday) at Castle Rock High School at 7:30 p.m. Win or lose, the team will play again on Saturday, as one of four teams vying for three berths to regional games. Check The Wahkiakum Eagle Sports Report page on Facebook for updates and scores.