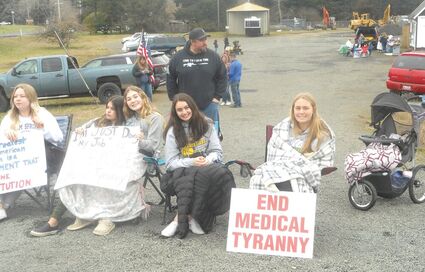 What a Week: It has been a busy time over the past few days. But the weather made it not only acceptable for February but stupendous. Lovely warm sunshine that encourages the ground to warm up as well as the plants in the ground. I hope you all enjoyed the sunshine.

Take a Break: Last Friday, I spent the day interviewing six individuals I invited as part of a new program called "Take a Break with Karen." Ken Johnson, CEO at Wahkiakum West, asked me to invite folks for the interviews. I invited six: Ken Johnson, Bob Torppa, Anita Raistakka, Krist Novoselic, Rick Ballif and Dan Cothren. They all came and were video taped by a professional crew so that the products will be high quality.

Wahkiakum West will soon offer a new option for cable TV. Included with that option will be a local TV channel. To view local programs, we'll have to change our TV providers to the new option for cable TV or visit our neighbors who might have it! Each person was questioned about their history, job, and other topics, so it was fun for me because I got to ask the questions. If this all goes forward as we hope, you might see many of your neighbors sharing all sorts of skills and talents. I look forward to a day in March when it's supposed to "go live." Thanks to all six folks who did a great job!

Protestors: While I wrote an article about the school protestors for this issue, I want to share a quote from Natasha Crater on Facebook: "I can totally respect protesting, but this is a K-12 school, not just a high school, and "banging on doors" is downright scary to a kindergartener. Really uncool. It would make more sense to keep the protest to the public right of way in front of the school. I knew about the protest and sent my daughter to school because I didn't dream people in this tight knit community would be so inconsiderate not only of the small children attending school, but also of the school staff who are just doing their best. By all means, protest. Let the world know where you stand, but a little common decency would mean a lot."

If any of us are wanting to protest somewhere I hope we can learn from the two protest days last week at the Naselle/GRV Schools. There are always good reasons to protest. The major difference, like anything that could be disruptive, is to plan well with goals such as: being polite to any authority, clearly stating your goals, using the same verbiage, and using any means that preserves dignity, an old but good word. Dignity always is respectful and reminds us we all are "one under God and indivisible with liberty and justice for all." Our neighbors are not enemies.

Wanted - Whole Trees: At the conservation meeting I attended last week, Peter Barber from the Cowlitz Indian Tribe reported that his program at the Tribe has been working with a few landowners in the area for restoration work on their property. One goal they have is to put whole trees in strategic areas in Grays River. They are currently working in the higher areas of the Grays and want to do more restoration work in the lower Grays. They need whole trees, including the roots and upper limbs. The trees need to be measured at chest high and have a diameter of 22-23 inches.

If you have any trees on your private property that you would like to fully remove, contact Peter Barber at (360) 947-2240 at the office or at (360) 839-9299 on his cell phone. Whole trees will not only help direct water flow, but they will also foster new trees coming from the roots and they help provide shaded areas for fish to rest and hide. If you are wanting to clear land, this would be one way to get trees fully removed. And you would be paid for your trees. Clearing would be much simpler than cutting and burning slash piles. The trees would still be alive for a time and remain part of the environment.

Grays River Flood Control District News: As of last week, there are three people considering becoming interim flood control district commissioners. Until they have all agreed, their names will not be given to the public. But have hope, we may be able to build up the district's leadership and help landowners both prepare and maintain their land for "managing" flood water.

I was reminded last week that the original name for the district was "flood control" and I fully support using that name instead of diking or any other name. We fully experienced the damage that severe flooding can produce. There are ways to slow down the current, to armor banks to help retain them and work with other landowners to co-plan projects that will help a section of the river. Many want to dredge the mouth of the Grays. That would certainly help, but in years to come, it would have to be done again because the Columbia will continue to bring silt in. Many have tried and some good has been done but the reality is we have to work with the Department of Fish and Wildlife, Department of Natural Resources and the Army Corps of Engineers as well as where it enters the Columbia. This river is not just water; it is fish.

While many aren't fisherfolk, others are. Part of our history is commercial fishing. Here's hoping we can get the three individuals to agree to provide leadership and work with these agencies as well as the funders.

Calendar: 1) Karl Marlantes will speak at the Naselle Community Center on March 19 at 2 p.m. Tickets are available at the Appelo Archives Center for $10. Seating is going to be limited, I suspect, so get tickets early. You can stop by the center or email them to order yours at: info@appeloarchives.org. 2) Kim Angelis, our very own violinist from Naselle, will play in a concert at the Naselle Community Center on March 5, so get that on your calendar.

Senior Lunches: The Senior Lunch Club meets the first and third Wednesdays of each month at the Rosburg Hall. The next lunches will be on March 2 and 16 at noon. The CAP box lunches are available for pick up every Thursday at noon at Rosburg Hall. Call Denice at (360) 762-3111 to reserve yours.

Word for the Week: Dignity.