On To State! Lady Mules advance with 59-40 victory 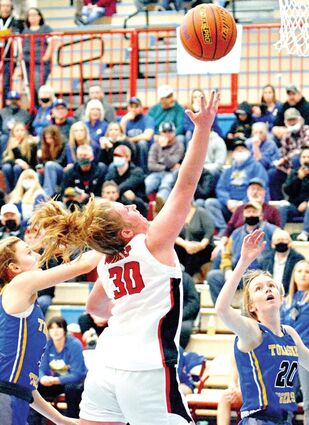 The Wahkiakum Mules girls basketball team headed to the State 2B basketball tournament in Spokane this week after beating Tonasket 59-40 in a loser out regional game on Saturday at Mark Morris.

"I thought the game was a lot of fun," Coach Rob Garrett said. "Obviously, Reigha [Niemeyer] had a great game, especially offensively, but overall we looked like a totally different team offensively, in a great way. The girls had way better decision making because they were low and balanced rather than casual. Everyone worked really hard and the girls collectively did their job so that we could keep the season going and make our goal of getting back to the Spokane Arena."

"We are very excited and grateful for the opportunity," he continued. "Every time we make it, our community comes up huge with tons of support and already we have had people reach out to help these girls have an amazing experience."

The 19-6 Lady Mules started the tournament on Wednesday with a loser out game against Warden at 10:30 a.m. If Wahkiakum won that game, they face 21-1 LaConner in the quarterfinals at 10:30 a.m. today (Thursday).

Updates and scores will be posted on the Wahkiakum Eagle Sports Report page on Facebook.