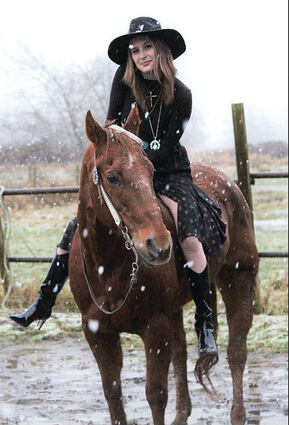 She’s been riding since she was about seven and participated in 4-H for a couple years. She took some lessons over the years and has been working out pretty consistently with a local rider, Kristina Heiner.

Like Davis, she too has been participating in gaming events like the Silver Buckle Series in Skamokawa and the EasyRiders Gaming Association at the fairgrounds in Longview.

They knew nothing about the WAHSET, Maddi’s mom Sunni Thoreson said.

“We got involved because Makayla was doing it last year,” Sunni said. “It’s quite popular, which shocked me, because I had no clue.”

Mom rides too, or she did until, as she puts it, “Maddi kind of stole my horse.”

She laughed. There’s really no time for it these days, between work and Maddi’s practice. The pair travel to Kelso twice a week to join the team for practice, which takes place on Mondays and Tuesdays from 5:30 to 9 p.m.

Maddi is involved in team events as well as solo competition. She does drill team, cow sorting, team bi-wrangle, and Canadian flags, as well as all the other gaming events.

She enjoys the cow sorting and pole bending events the most, and is having fun while making some new friends. It’s keeping her busy.

Proud mom also pointed out that Maddi is maintaining a high GPA while competing.

Maddi’s favorite class at WHS is Ag Mechanics, and even though she’s in ninth grade, she's already considering a career in nursing.

Crystal Davis, who watches her own daughter participate in WAHSET and has a special perspective as a former wrestling coach, was pleased to see what competition has done for Thoreson.