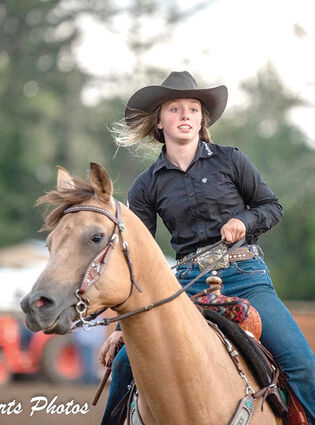 Wahkiakum High School sophomore Makayla Davis, who was raised on wrestling, is finding success in a different arena.

"I thought I was busy during wrestling season, but this is worse," Makayla's mother, Crystal Davis said. Crystal was a wrestler at Wahkiakum High School and coached the wrestling team for several years. Makayla grew up on the mat.

Every Tuesday, Makayla and her dad, Dave Davis, head to Kelso to meet with their WAHSET team for practice, from 5:30 to 9 p.m. Every weekend, the family is on the road, and if it's a rodeo event, it's on the east side of the state.

Makayla started riding when she was six or seven.

"I had a fascination with horses," she said. "My parents thought it was a phase, but one day I got a horse."

She got a lot of experience with showmanship early on, but mostly she wanted to ride. She was self taught, she admits, and fearless.

"Makayla has been doing a lot of gaming shows, and some of the Kelso coaches who have watched Makayla over the years approached her," Crystal said, adding that Makayla was also recruited to compete in the rodeos.

In order to make state in Moses Lake in May, she has to place in the top three in a single event in two of the district meets. Or one can beat a record to get an automatic trip, which Makayla almost did last year.

She did go to state as a freshman and was named Rookie of the Year while the Kelso team took first place in versatility.

For the Kelso WAHSET team, Makayla participates in barrel racing, pole bending, and the figure eight, and she competes in pole bending and goat tying in rodeo.

Makayla had been riding in junior rodeo when she was approached about competing in the high school rodeo.

"There was hesitation because high school rodeo cost lots of money," Crystal said. "A lot of people will spend around $20,000 on their kid's horse. It's that kind of level."

Encouraged, the family decided to take the plunge and sought sponsorships.

"The community really stepped up and helped out with sponsorships, pay for gas, entry fees, etc," Crystal said. "We decided to do it, and here she is now sitting in sixth place for the state of Washington for pole bending, and in 11th for girls."

Makayla has been winning events on a $2,000 halter horse named Teanna.

"She wasn't ever supposed to be used for gaming events," Crystal said. "We didn't think she would be at that level."

"She was bred basically for showmanship," Makayla said. "She was double muscle bred, so she has more muscle than the barrel horse would."

Teanna doesn't seem to know this.

"She loves it," Makayla said. "She gives it her all. I love Teanna to death."

The two are a team, bonded.

"If you aren't bonded, you're going to struggle, you are going to fight with each other and it is not going to be a good run," Makayla said. "When I'm about to run, I have very bad anxiety. Horses can feel anything. Teanna picks up on my anxiety and she knows it's time to go."

"We're hoping he will be up and going for next year's competition," Crystal said. "He's thoroughbred and quarter horse, bred for what we're doing."

Makayla is having a great time, and wants to continue in the sport after high school.

"This is what she wants to do when she gets older," Crystal said. "This is her passion, she wants to be a professional barrel racer. Those are her goals."

"I love it," Crystal added. "To see her smile again is the best thing ever. She loves wrestling, and I think she more or less did it because that is what mom loves, but to do something she really enjoys is the best thing ever. To see that smile on her face, coming home with a clean run, it's the best. It's worth everything. All the drives, all the time that we're putting into it just to see the smile on her face, it's worth it."

"The hard work pays off. Also having mom and dad's support means a lot," Makayla said. "I'm having a blast."