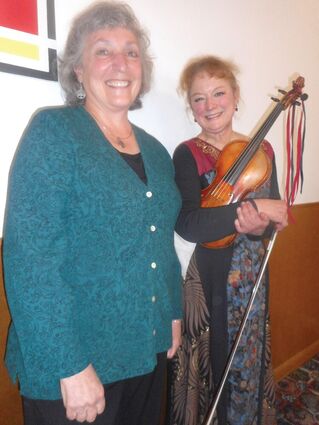 One might think that because we live in a rural, out of the way community that most visitors just drive through, we have to leave the area to enjoy extraordinary musical talent. A recent concert cleared up any misunderstandings by proving that is not the case for those of us living here. One of those moments when an audience could be transported to "another place" is in the music played with magic and skill last Saturday.

"Transported" was the universal response to the team of two women, Kim Angelis and Jennifer Goodenberger last Saturday at the Naselle Community Center. Kim, a highly skilled, dancing violinist, who wrote her own pieces, and Jennifer Goodenberger, who also wrote her own pieces, are two women with years of musical experience and finely tuned talent who took the audience far away in heart and spirit for over an hour. Kim is clearly a highly trained classical professional with not only talent, but discipline in her playing. She dances as she plays often with a Gypsy sound. She also feels her music with deep emotions. Her piece titled, "Sequoias," dedicated to the magnificent trees of California, was deeply felt by all.

The rather small sanctuary of the former Naselle Congregational Church that was donated to the Finnish American Folk Festival is now a community center. The center's high ceiling and wooden pews made a wonderful acoustic instrument itself. The hall projects a full sound for voice as well as music but especially for a violin played confidently with energy and emotion. Kim pushed her instrument to be full and loud when needed, and it never failed her. It is a fine violin with a rich sound. Kim's talent as a composer was illustrated by her various styles that would challenge the most experienced violinists.

Jennifer's pieces were romantic and melodic. She has made numerous CD's, and her music has been used in movies. A skilled accompanist, she was both supportive and sensitive to Kim's playing, which at times was more energetic than a high school athlete. Jennifer kept up just as fast as Kim played. Her pieces were pensive and thoughtful and very skillfully written.

It was disappointing that the event was not as well attended as it could have been. Since Kim now lives in Naselle and Jennifer lives in nearby Astoria, it is wonderful to know they will be back. This July they will be playing at the Finnish American Folk Festival at the end of July. If you missed them this time, add them to your calendar so you won't miss them next time.