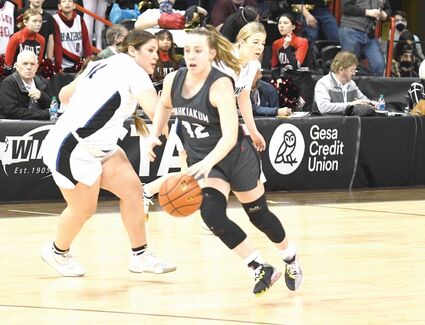 Miya Kerstetter drives past a Warden defender. The eventual champions knocked the Lady Mules out of the state tournament with a 55-40 victory.

The trip to Spokane may have been a short one for the eight girls on the Wahkiakum Mules basketball team this year, but the season will hold a lot of memories for them and their coaches, as well as their fans.

In the opening round of the State 2B tournament, the Lady Mules were able to hold off the Warden Cougars for the first 16 minutes, but the Cougars must have grown some teeth at half time, because they went on a tear for the final two quarters, beating Wahkiakum in the loser out match, 55-40.

Warden would go on to take the State 2B title on Saturday.

"It's never fun to lose," Coach Rob Garrett said, "but going out to the eventual state champs isn't too bad, not to mention we held them to their lowest scoring total of the tournament. The girls played a great game and unfortunately ran out of gas on the big court. To make it back to Spokane with only eight players is no small task. I don't think there are many, if any other teams that could have done that at our level. That says a lot about these girls. Their determination, hard work, and love for the game was top notch. This group came a long ways this year, they got better day after day and they weren't scared to step outside of their comfort zones. From the pregame raps to the bench celebrations, these girls figured out how to have a great time all while working at the game they love." 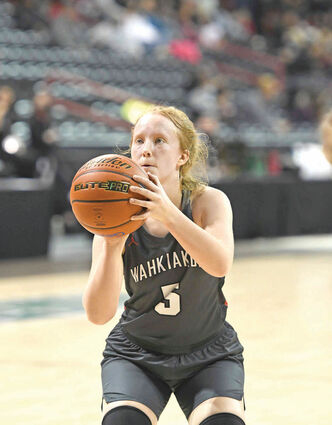 Courtney Carlson lines up a free throw for the Lady Mules.

"We are extremely thankful for the experience and the opportunity to play again in the Spokane Arena," Garrett said. "Our fans and community support is like no other. They really know how to make sure these kids have an amazing experience, one they will never forget."

"Personally, I couldn't be more thankful to not only the people who made that happen, but also to the girls for everything they did to get us there. The moment I was able to share with my daughter on that court prior to the game is one I will never forget."

"The girls overcame challenges, fears, and much more all for each other this season. It was far from perfect, but it was certainly a hell of a year. I'm extremely proud of all they accomplished this year, and they proved a lot of people wrong along the way."

The Lady Mules were first in the Central 2B league this year, and took fourth in the District 4 tournament. They finished the season with a 9-1 league record, 19-7 overall.