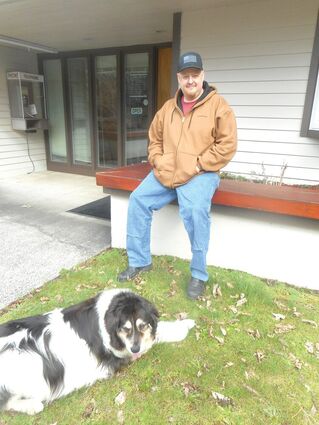 Mark Harrington at Wahkiakum West's office with Ben, Karen's dog. He is a new employee assigned to services on the Long Beach Peninsula. Photo by Karen Bertroch.

Naselle/GRV School State tournament summary: None of our local teams were able to place at the Washington state basketball tournaments last week. Both Wahkiakum girls and Naselle boys lost their first games and were eliminated. The Lady Mules opened against Warden and lost 55-40; Warden placed first in the tournament. The Comet boys fell to Northwest Yeshiva of Spokane 60-48 in the opening round. NW Yeshiva placed third overall. The Comet girls opened with a 53-45 win over Wellpinit in their Wednesday opener. On Thursday, they fell 47-26 to eventual champion Mt. Vernon Christian. The loss dropped them into a loser out game with Mossyrock, who won 46-12. Mossyrock finished fourth in the tournament. So proud of our sports teams. They made it to State and represented our school so well. Congratulations!

Remember School Board meeting on Tuesday, March 15 at 6:30 with a Zoom connection. You can find the connection instructions by checking the school's web site and looking at the bottom of the agenda for the meeting.

Speaking of our School Seniors: I have a call into Mike Swanson about the Naselle Education Foundation. I know there are many scholarships given at graduation. I'd like to find out how we, the community, can help with funding. I'll give you an update next week.

Photo of the Week: Mark Harrington, new employee at Wahkiakum West, has been working there since January as the new Install/Repair Technician assigned to the Peninsula area for supporting broadband when it's installed. He has more than 10 years' experience working for other telephone and cable TV companies. When he installed the new system at my house, I was impressed with his strong interest in answering my questions. I interviewed him last Friday afternoon and both Ben, my dog, and I enjoyed the time with him. He lives in Surfside up near the tip of the Peninsula and is looking forward to meeting new customers there and helping them get set up when Wahkiakum West's broadband gets running soon. There is a standard of customer service at Wahkiakum West that he will meet as do the other employees. He is enjoying working there partly because of the staff he works with. He and his wife, Trisha, moved to the area in 2008. He says he "really enjoys the area and is learning what a great place Naselle is" since he hadn't spent much time there before he went to work at the office in Rosburg. He has met many customers already because he's working out of the main office as he begins his time there, and in the field helping with installs and repairs. His wife Trisha works for Long Beach Ministries, so she knows the area as well. Since Mark used to work for both Spectrum and CenturyTel, he knows lots of folks in the Peninsula area so that will help him in his new job. He found out Wahkiakum West was expanding out there and he was looking for a better job, so he immediately contacted Wahkiakum West himself and was soon hired to represent Wahkiakum West as it expands its services. Mark's thought regarding his responsibilities as a Wahkiakum West employee begins and ends with customer service. He told me, "People choose a service provider according to the service they receive." He is confident in his ability to do the work, but one thing he appreciates is that "The staff feels like a real family here. Everyone has been welcoming and given me help and support as I'm getting started." He also commented, "It's an exciting time to be working here and watch the company grow. I like the vision of what can happen." One thing he said that I liked was, "Integrity is very important to me. It's what separates a company and shows intention of meeting customers' expectations and how to deliver what they expect from us." He clearly wants to make a difference and I have no doubt he'll work hard to meet those expectations. And he's such a nice, kind person. So glad he is going to be part of our community.

"Deep River" author Karl Marlantes will speak on March 19 at Naselle Community Center: Many readers and residents are excited to hear Karl Marlantes speak about the area, his history here, and the book he wrote, "Deep River." Karl's book has been a tremendous success and is available for purchase or to borrow at the Appelo Archives Center and library. Tickets are for sale at the Archives Center for $15 before the event or $20 at the door. Karl's map at the front of the book is not truly accurate but Karl explained that if he used the name of Naselle, it would be a challenge for them to pronounce it correctly, so instead he chose Deep River. Karl has been traveling extensively since it was published so we are very pleased to have him come to Naselle and share what makes the book important to him. One benefit of the book is the information given on the "wobblies," as there are not many books that have included that topic so it's a good thing to learn more. I have my ticket, so I hope to see you there!

Calendar: Grays River Flood District (I like that name) meets on Wednesday, March 9 at 5:15 at Johnson Park. Hopefully we will be able to meet two men interested in serving on the board: Krist Novoselic and Charlie Shumar. New name is on the agenda for that meeting.

Word for the Week: Prayer