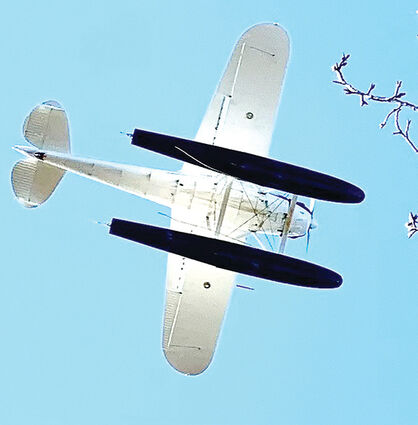 A float plane recently soared over Cathlamet. The plane's owner would like to site his business in the Elochoman Slough Marina. Photo courtesy of Jim Kolberg.

Steven Hansen, who lives in the Marina Estates area, approached the Port District 1 Board of Commissioners on Thursday about the installation of a gate at the rock pit, which connects the marina to his neighborhood. He said a neighbor had been threatened after he confronted a man who had driven through, that three cars of joyriding high school students had traveled through one day, and that "sketchy characters" were seen coming and going.

"It won't restrict our right of way at all," Commissioner Scott Anderson said. "I agree with his assessment that this is probably a good fix for this problem."

After some discussion, commissioners agreed that the port should speak to the sheriff's department and the fire department, and that Hansen was welcome to hang a gate that he already owned.

Maintenance Manager Todd Souvenir said he had spoken with the float plane owner who had been in talks with Port 1 about moving his business and his hangar to the Elochoman Slough Marina.

The owner decided that he would like to have his hangar placed at the end of D Dock, Souvenir said. The maintenance manager was concerned that some vessels would be displaced if that portion of the dock were removed to make room for the hangar, causing the port to lose revenue.

"Doesn't sound like it's going to work out," Commissioner Art Hedman said.

The other commissioners agreed.

"I don't see it on D Dock. It would end up being a hazard, there's too many little boats running around," Commissioner Brett Deaton added.

"His concerns and his desires don't really match up with ours right now," Anderson said.

Souvenir said he would tell the pilot that the port would be interested in continuing the conversation if he would consider F Dock.

"Those plane rides would be awesome to have around here, it's too bad we can't set him up with a place to bring his plane to," Hedman added.

Souvenir talked to the commissioners about making improvements to their aging sewer system. 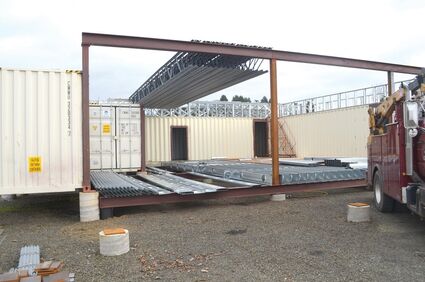 Contractor Les Burns is steadily making progress on River Mile 38 Brewery's new space at the waterfront. He's setting in steel beams for the floor right now and when that's complete, he'll set up scaffolding, and begin working above. "Here's hoping for good weather and no more delays," Rex Czuba said on Tuesday. Czuba, along with Javier Sanchez own River Mile 38 Brewery, and the new space will include a kitchen, indoor and outdoor seating, and the best view in town. Photo by Diana Zimmerman.

"You're looking at just under $12,000 to put the duplex pump system in, along with having it installed, and then you would have the cost of the electrician hooking it up, along with someone doing the construction work and the labor for digging the hole and putting the new pipe in," he said.

"It needs to be done," Deaton said. "This system is about to be stress tested again with all the fishermen."

Souvenir said that the project could potentially be completed in May. He agreed to do more research so the commissioners could address the issue at the next meeting.

In other news, Souvenir said that the port was prepping for visitors, and that there were only a handful of sites still available for campers in the coming weeks.

"We will definitely be full," he said.

Souvenir also said that the port had been approached about renting space for a mobile kayak rental trailer.

"The kiosk does not rent before sunrise or after sunset for safe boating regulations," Souvenir said. "It's definitely something we have interest for. The question would be location."

The idea met with approval from the commissioners.