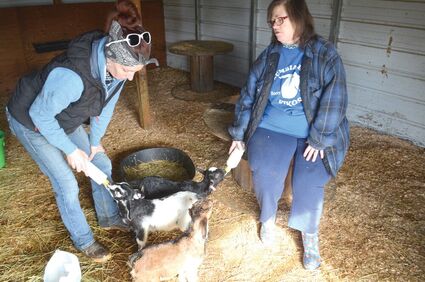 I wish I could express to you just how enthusiastic Puget Island resident Laura Tronson is about Kikos, a New Zealand breed of goats, but if you ever spend a little time with her, you'll soon know exactly what I mean.

It fairly bubbles from her.

Tronson lived on a hobby farm as a child and was exposed to a few various farm animals, but it was only after moving to Wahkiakum County a few years ago that she considered having a couple goats. And that was only to help maintain their property.

The Tronsons started with Boers but struggled as they lost goats to parasites and other things.

She almost gave it up, but then she learned about Kikos, a hardier New Zealand breed.

"There is a day and night difference," Tronson said.

The couple purchased their first Kikos in February of 2018, and were so pleased with what they found, it wasn't long before they were back, this time buying registered Kikos for breeding.

"Whether you are raising them for genetics or for meat, this is a great breed to get into," Tronson said." They are hardier and less maintenance than other goats."

They seem to thrive better in this particular environment than their Boer cousins.

There has been so much to learn.

One of the Kiko does gave birth three weeks early in February of 2019, Tronson remembered. There were strong winds that night, and Tronson was awakened by the sound of metal clashing. She found one of the kids still in the membrane, almost dead. Tronson brought her inside and warmed her with a hair dryer and heating pad, and started feeding her with a bottle.

Two veterinarians told Tronson that goat and another would never make it.

"Today they are still with us," she said.

The birthing season last year was one of their hardest, Tronson said, but she went back to the research and began adding copper, zinc, and selenium to their diets. She is very selective about their food.

It seems to have made all the difference. Births were largely unassisted this year, and the kids started at healthy birth weights.

That means that the Tronsons have 29 babies joining their five bucks and 17 does.

One of Tronson's constant concerns is average daily growth, and so there are regular weigh-ins, but they are finding the breed to be healthy and putting on weight.

"We got some really strong goat genetics," Tronson said.

While they can be used for dairy, Kikos are generally bred for their meat.

"I could give up beef for this," Tronson decided after tasting the meat, adding that it had less fat and cholesterol than chicken and rabbit.

It's obvious that Tronson derives a lot of pleasure in learning about this breed, but she's also found them to be friendly, loving creatures, though sometimes ornery.

"We want to enjoy more of this breed," Tronson said, "which we are very proud of."

The Tronsons have shown the Kikos and won ribbons at the Wahkiakum County Fair, and Columbia River Kikos enjoys membership in the American Kiko Goat Association and the National Kiko Registry. 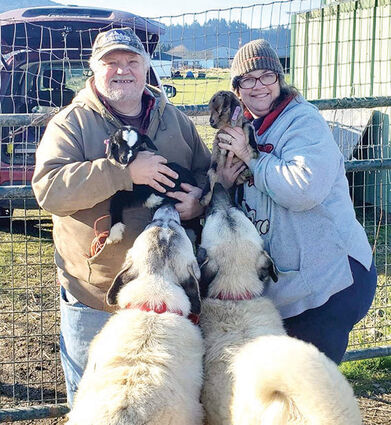 Tom and Laura Tronson with their Anatolian sheep dogs and a couple baby goats.

"We get calls all the time from various places looking for special breeds," Tronson said.

Michelle McGuiness comes out twice a week to assist Tronson. She has worked at a local creamery, and Tronson considers her a "Godsend."

Eventually, the Tronsons hope to sell their home on Puget Island in order to downsize and find more pasture for their flock, One day, Tronson hopes to try making soap with goat milk.

"I feel blessed," Tronson said, "We want to be of help in anyway we can to share and provide our knowledge with others of this wonderful breed."

To learn more about the Tronson's farm and Kikos, check out the Columbia River Kikos website, https://www.columbiariverkikos.com.