N/GRV board, youth camp are feeling the winds of change 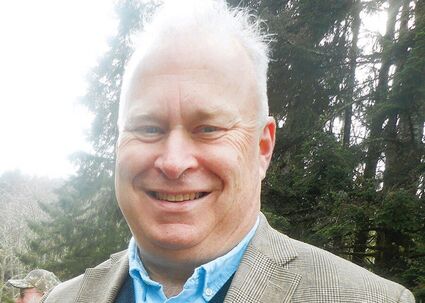 Rep. Jim Walsh at the demonstration in support of the Naselle Youth Camp.

Naselle, small that it may be, is a center of transition this spring. Two events last week gave us clear signs of change in our small area of Southwest Washington. In the past, Naselle/Grays River Valley’s School Board has often met with only two to five people attending from the public. For the past six months, a group of parents has been attending who want change in the way schools are led and decisions made.

At the last board meeting on March 15, members of the public spoke wanting parents to have more authority over the school’s decisions. As in recent months, the staff and board were again criticized for the way the protest against wearing masks was handled by staff.

One parent, who spoke just after the earlier protests during the week of February 6, said: "Our kids aren't protesting against the school or teachers. They are protesting the government forcing them to wear masks. As to doing it in Olympia, or any capital, when has that ever accomplished anything? There's always some protest of some sort going on there. Nobody's listening. It's going to take lots of these small grass roots uprisings all over the state/country to get the government to listen to the people who have something to say. Comet staff, don't take it personally. Sometimes it takes a little civil disobedience to make things change.”

Another speaker at the last board meeting stated: “We want you to pass a resolution stating that parents are the primary authorities. If it is not passed we will withdraw our children by end of 2022. We understand your hands are tied. Let’s restore authority back to the parents. In Oregon 75% of funding comes from the local level. Ultimately, they see it as their school districts in the state, but there are other districts who treat that completely differently. Many are scared to speak at these meetings. We’re trying to help you guys."

Those who spoke at the March 15 board meeting spoke in favor of the board being more active in helping parents have more authority over the school. They see the board as “working for us,” the parents. However, the board has been chosen by the public to represent them and to manage the school as required by law. The most recent request at the meeting on March 15 was for the board to let the state know that if vaccinations were required in the future, the board would not enforce that directive.

The board has responded several times stating that the board is required to follow laws and mandates as determined by the state. Funding is in jeopardy if the board does not follow state directives. The conflicts that arise in these meetings are simple: The board is caught between the state and the parents who are making demands the board cannot meet legally. The parents in the group want to be making more decisions, but that is not the way school boards are set up.

Finding a compromise seems to be a challenge. Hopefully, the two groups can find that compromise. Action items at the last meeting did include approving the senior class trip to Sunriver, Ore. Personnel changes were accepted including resignations from coaches and the hiring of new coaches for track and baseball teams. The board met in executive session regarding a review of the superintendent after the principal and superintendent reports were finished. The agenda also addressed the extension of the superintendent’s contract. After two hours, the meeting adjourned.

On Monday, Superintendent Lisa Nelson commented, “The closure and reduction in force (RIF) process will be discussed at the April board meeting, and I will have a resolution ready for board approval. I will meet with both union groups prior to that meeting. I don’t know what DCYFS (Dept. of Child, Youth, Family Services) has planned given the timeline. Teachers have to be notified by May 15 if they have a job for next year. So we have to plan all of this without really knowing very much.”

On March 15, a group of supporters attended a demonstration outside the gates of the Naselle Youth Camp in support of the camp remaining open.

Rep. Jim Walsh attended along with Wahkiakum County Commissioner Gene Strong. Attendees were pleasant, polite and clearly focused on the value of continuing the program at the Youth Camp.

However, support appears to have not been enough. At the same time the demonstration was present at the camp, Ross Hunter, secretary of DCYFS, and members of his Human Relations (HR) staff were present in a closed door meeting to hear his comments. Since the governor has not changed the plan to close the camp to all mid-to-moderate-offenders, the camp will most likely close, and teachers and staff will lose their jobs.

Topics of the closed-door meeting appear to center on staff’/teachers who were given information on resources available to help them find new jobs and relocate if necessary. This gave the more than 90 employees cause to drop their hopes of the camp remaining open.

If that full closure happens, the entire community will be affected. The loss of jobs will cause changes that cannot be fully predicted at this point. For the N/GRV School District, it will mean a large loss of state funding because the students at the camp are included in the total number of students served in the district, thus cutting significant funding. Employees who must move will take their children out of the district, further reducing enrollment numbers.

The last of the boys at the camp will leave at the end of December, so the school there will close. The camp’s ownership will be moved from the State of Washington to the Department of Natural Resources as of the end of June, 2023.

The many efforts made to support the camp as it is and to increase the number of boys living there are appreciated. It is clear that as each day goes by, the chances of the governor cancelling this closure are less likely.

The school board was caught by surprise as much as the community by the reality of what’s happening. Once ownership is moved to the Department of Natural Resources, planning will begin for an outdoor education program, but the full understanding of what that will mean is not yet clear. It is hoped that the school district will remain a partner with the new programming because Outdoor Education – hopefully -will keep education as the foremost mission of the new program.

As this change moves forward, supporting our teachers and staff who are leaving their current positions seems to be our next step whenever the camp does close. Again, firm dates and transition plans are needed before all involved can begin understanding the changes at the camp and in the community.