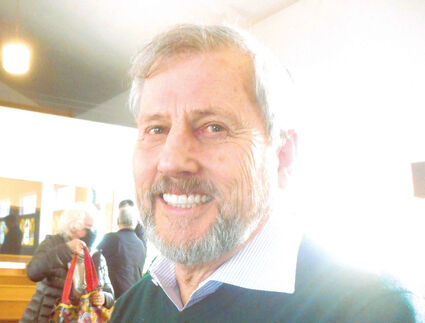 Just got word that Ted Swanson died March 21 at home. We offer our prayers and tears.

Announcement: A community meeting has been scheduled for this evening, March 24, at 6:30 p.m. at the Naselle Community Center with Rep. Jim Walsh in attendance to discuss the possible closure of the Naselle Youth Camp. Governor Inslee has also been invited. The Community Center is on Parpala Road just past the library in Naselle in the former Congregational Church.

Karl Marlantes: Last Saturday, Karl Marlantes, author of "Deep River," a well written and researched novel depicting the early history of the Naselle immigrants and their history, spoke at the Naselle Community Center. Standing in front of an audience of admirers who had all read the book, they were attentive and admiring of the four years of research the author had put into his story. Along with the research he had done, including a trip to Finland, Mr. Marlantes was full of memories of his grandparents and childhood in Naselle, and mixed those with the facts he had found through extensive research into the Kalevala, the well-known story/poem of the history of Finland. It was interesting to see that many of the attendees were from outside this area, and some had traveled many miles to attend his talk. Thanks to the efforts of the Appelo Archives Center and the Finnish American Folk Festival, the event was well received and well attended. His book is for sale at the Appelo Archives Center.

More books: To anyone new to the area, Karl's book would be a fine investment along with "Beach of Heaven" by Irene Martin. These two books give a complete history of the area in their own way. A nice follow up to Mr. Marlantes' talk could be a talk by Irene Martin telling her own stories about writing her book, as well as her writings about Kent and Irene's life as commercial fisher folk.

One more book I would suggest you seek out is "Reach of Tide, Ring of History, A Columbia River Voyage," by Sam McKinney, well known historian and writer. He built a small boat for his journey so he could hug the shores as he traveled alone. His preface says, "As the voyage by boat up the Columbia was a journey, so too was the writing of this book. It was a journey into my own past by which I discovered those places and events along the Columbia River that largely shaped my life. The voyage and writing the book together, for me, were what French author and philosopher Albert Camus calls that "trek to rediscover through the detours of art, those two or three great and simple images whose presence our heart first opened. I call these images the sources of spirit. The indigenous people of the river shores saw the Columbia as a place of spirit. In less conscious ways, so do the people I write about in this book perceive the river. My book borders on the edge of nostalgia given the dignity of history. But I hope that what I have written will reveal that the Columbia is more than a river of nostalgia and history. For our time (and never so needed) it is a place, a presence, a force and a source for spiritual replenishment. I would urge you to discover through whatever your art, this river, this life source of our lives." If you can get an original copy with the art by Elsa Warnick, (I found mine on Amazon) it would be a true find for you to have in your library. I read it often. It is not long, but rich in information and characters and the history of places now gone but remembered as they were in years past. In his talk, Karl Marlantes talked about how the populated towns he grew up with here have lost so much. Old photos show the changes. See them at the Appelo Archives Center in Naselle.

Rosburg Hall Ladies: Last Saturday, a funeral was held for Thelma Miller at Rosburg Hall. The ladies who volunteer at the hall were glad to help with her funeral. While many in the area are volunteers for various events and services, there are few who equal the years of service the "Rosburg Hall ladies" have given over many, many years. They arrange for events, cook for the events, clean up after the events and we owe them our thanks and affection. They cook and serve for the twice monthly Senior Club lunches and feed from 30-50 people each time. They are jewels we need to thank often. If there were a prize for volunteers in our area, I would nominate them gladly. Sonya Kruse has been there for many years, Frieda Footh comes in along behind Sonya with Barbara Rose, and there are many others as well. Let's remember to thank all our volunteers who make our lives richer and healthier! Small communities thrive on not only being friends, but extended family for one another. Thanks to all our community volunteers.

New Business in Naselle: Phil Malmstadt from Chinook has built the new metal storage building in Naselle near the Appelo Archives Center. He and his wife, Amy, have been clearing the land for several months and have opened up the property nicely. The new building is being advertised as storage for large RV's and other large vehicles. The doors measure 12 x 12 ft. and 40 ft deep. They can be reached at the Peninsula Auto Detailing company at 644 SR 101 in Chinook or at (360) 244-9774.

Calendar: Sponsored by the Wahkiakum 4-H, the annual White Tail Run is scheduled for May 14 at 10 a.m. at the Julia Butler Hansen Refuge. For fees and registration, I found it at: https://gamefinder.com › activity › great-white-tail-run / or facebook page using hashtag #GETR2022.

Sock Hop: You are all invited to attend a free event on March 26; a sock hop on Puget Island at the Bridge Church on Saturday, March 26 from 5:30 to 8 p.m. Glenn Wiest will spin some records from the 1954-1964 era! Head to Puget Island and have some fun dancing to the oldies. This sounds like so much fun! Bridge Church is between Puget Island Fire Hall and Our Saviour's Lutheran Church on SR 409.

Bingo Night at Rosburg Hall: Saturday, April 9 at 6:30 p.m. Bingo cards 3 for $10 with prizes for adults and children. Snacks, soft drinks, coffee and tea will be available.

Super Sale changed to Saturday, April 23 from 9 to 4 at Johnson Park. One table is $15, $10 for each additional table. Contact Shonda at (360) 465-2722 to reserve tables. The Dress a Girl room will also be open that day. Contact Pearl Blackburn at pearl.blackburn@gmail.com.

Senior Lunch Club: The next club luncheon will be on Wednesday, April 6 at Rosburg Hall at noon. CAP lunches are available every Thursday at noon at Rosburg Hall. Menus for the rest of March include: March 24 Pork Chops & Gravy, Mashed Potatoes, San Francisco Blend, Apricots. March 31 Meatloaf, Baked Potato, Peas & Carrots, Orange Parfait. Contact Denise at (360) 762-3111 to reserve yours.