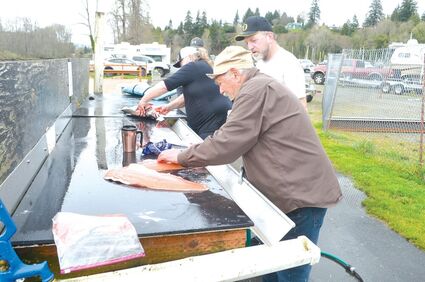 Bob Barry, who lives in Oregon, is a regular visitor to Wahkiakum County during the fishing season. Port 1 Maintenance Manager Todd Souvenir was enjoying a day off and some fishing, and requested a lesson in carving a salmon having seen Berry's beautiful work in prior seasons.

This year's Hook the Hawg, a fishing derby hosted by Port 1 and organized by the Wahkiakum Chamber of Commerce, found just the right bait to draw competitors to the Elochoman Slough Marina, last Thursday, Friday, and Saturday.

And someone out there who hooked a rumored 22 pound salmon on Friday is probably kicking himself, with first place prize money in the open division at $1,650.

There were 127 competitors this year, with two-thirds of them visiting from somewhere outside of Wahkiakum County. All the entry money went into the prizes for open, women, and youth classes. First place in each division took 60 percent of the the prize money, second place took thirty percent, and third place took home the final 10 percent. 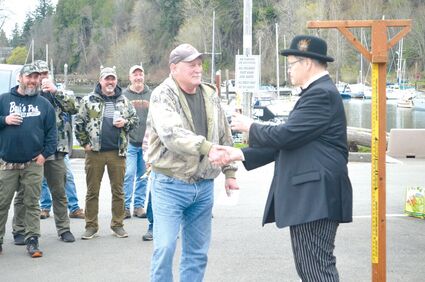 Kevin Reichart of Centralia was the big winner of this year's Hook the Hawg fishing derby, taking home $1,650 for his 18 pound catch. He collected his winnings and trophy from Mayor David Olson at an award ceremony on Saturday.

In the women's class, Ruth Daarud of Centralia took first place and $210 for a 10 pound fish, and Tara Tice of Wahkiakum County won $110 for an 8.8 pounder.

In the youth class, Collin Montgomery of Wahkiakum County took first place and $55 for a 9.2 pound fish, and Landon Orr of Rochester won $15 for his second place 8.7 pound fish.

The Chamber was thrilled with the turnout, seeing people coming into the community, staying at local lodging, buying gas, eating at local restaurants, and more.

"It's been sleeping around here, so this is wonderful," Monica Budd of the Wahkiakum Chamber of Commerce said. "We didn't expect it. We thought we would get 40 people, but we got close to 130 people."

"That was such a fun event," she added, noting that with last week's success, the port was already considering a second derby in August.