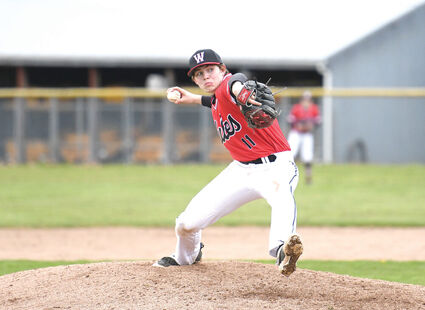 The Wahkiakum Mules baseball team started adding to their win column last week, beating Rainier on the road and Naselle at home.

On the road last Thursday, the Mules beat the Timberwolves 17-5.

"It felt really good to go out on the mound and compete," Curl said. "I was really feeling my off speed stuff, so I went with that early. The team helped me by getting runs on the board early. While that helps relieve some pressure I knew I couldn't let up on them. [I'm] glad we were able to put up a W."

"Overall, [it was] a really good game," Coach Garrett Radcliffe said. "The Mules jumped on the Mountaineers early. Their pitcher was putting it in the zone and we were able to capitalize. Dominic Curl was dominant on the mound, and Zakk Carlson played solid defense as catcher.

"Zakk was our catalyst offensively, starting us off strong and continuing to produce at the plate all game. We were aggressive on the base paths. We tightened up defensively to help out our pitching."

On Friday, Wahkiakum hosted Naselle in a non-league matchup and won 5-3 despite trailing the Comets 3-0 after five innings. 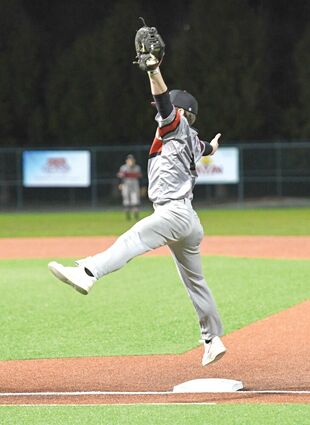 Mule Cooper Carlson reaches high to make an out against Rainier.

"Collupy was a workhorse on the mound, nearly pitching a complete game," Radcliffe said. "[He] was pulled after six 2/3rd innings because of pitch count limitations. Carlson continued his dominance at the plate, helping the Mules rally in the bottom of the sixth with a two RBI double."

"Overall, as is the theme this season, these boys never give up," Radcliffe added. "They always continue to fight. The Naselle team was great and their pitcher was really getting it done on the mound. The Mules fought through some errors and maintained an even-keeled mind-sight, continuing to battle. I'm very proud of my boys."

The Mules will return to play on Monday following this week's spring break, hosting Napavine in a double header.