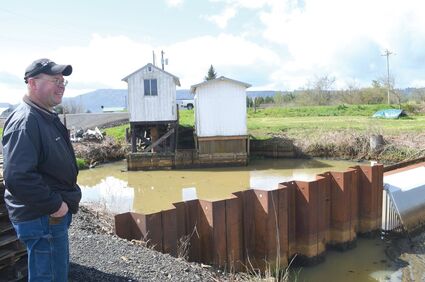 Puget Island Diking District Commissioner Tony Aegerter showed off the new trash rack which was installed in 2020 to protect the two pump houses on Little Island from debris.

The Puget Island Diking District maintains 19.3 miles of dike and six pump houses as part of a flood protection system for the homes and properties that make up the 3,585 acres on Puget Island and 480 acres of Little Island.

It takes people, mostly volunteers, and money to manage and maintain it.

"People need to realize what we do, because a lot of people think all we do is collect taxes and pay the electricity bill on the pump houses," Puget Island Diking District Commissioner Tony Aegerter said. "We do a lot of other things to help."

District taxes do pay for the electricity to run the six pump houses, which might cost $35-40,000 during a dry year, and go up to as much as $70,000 during a wetter year. But the taxes also go toward improvements in a system that will always need some kind of maintenance.

"The last major federal improvement program was in 1977," Aegerter said. "They raised and widened the dikes, strengthened everything, and put in four new pump houses on Puget Island."

"Things wear out, and we have replaced two sets of pipes on two pump houses now," he continued. "I think last year's budget alone was $135,000. That's just pipe and labor."

"We're trying to be proactive about this instead of replacing things when something bad happens," Aegerter said. "With more people being in the district now, because we've got all these new houses, we've been able to do all this maintenance work without deferring it."

The pumps, which the district maintains, move water back into the river, kicking on automatically when water levels rise inside the dike. The land would be saturated, especially during the rainy season, if they didn't.

The district has taken on other projects to encourage drainage in other ways as well. They have improved drainage ditches. Some of their recent work can be seen along Cross Dike Road, where the district has done a "dig out." They've also sprayed aquatic weeds that clog up the waterways.

Since they've stepped up that program, it has decreased some of the maintenance they've had to do at pump houses, including cleaning out trash racks, Aegerter said.

While the pumps move water, they also pull in debris. Trash racks as well as other barriers, have been put in place to protect the machinery. On Little Island, one new barrier was installed in 2020.

Maintaining the right of way

The diking district owns a 100 foot right of way along the levee which includes 20 feet from center line of the roadway to the outside of the dike, and 80 feet from the center line to the inside.

"It does vary in a few spots, but we stick to that," Aegerter said. "If we have to get down to the nitty gritty, we pull out the survey maps to find out what's going on."

With 19.3 miles of a 100 foot right of way to care for, the diking district encourages landowners to keep their portion maintained.

"In order for us to maintain that year round, we would have to have a full time guy just mowing," Aegerter said. "That's all he'd be doing."

The district allows some fencing and non permanent structures in the right of way, but ultimately a vegetation free zone is best.

"If we had a problem, we can come ripping through fences, and there ain't too much people can say about it," Aegerter said.

Even trees can be questionable in the right of way. In fact, some trees along West Birnie Slough Road have been marked for removal because they are in danger of uprooting and creating big holes in the dike.

All that being said, the diking district recognizes that people's yards are decorative.

"You don't want a barren landscape, you want to encourage people to be proud of their yards," Aegerter said.

Within reason, he added. Because sometimes they have to work with landowners to correct where they may have overreached.

"Most of the farmers have been here for awhile and understand what is going on, but some of the new people don't even realize that they are sitting behind a dike," Aegerter said. "They start tearing into things that they shouldn't."

Fortunately, it's a two way street, and sometimes they get to help their neighbors who let them know the water is getting on their land or report a beaver dam that needs to be removed.

Why does the district worry about maintaining the right of way?

There is the immediate: The diking district mows and otherwise maintains those 19.3 miles so they can see any problems or potential problems immediately, whether it's a breach, a collapse, some sort of erosion issue. Maybe a nutria decided to dig.

And there is the long term:

The diking district was formed 1914-1917, Aegerter said. The federal government came in to strengthen and raise the dikes in 1939 and have returned several times since then to help.

"In order to stay in that program, we have to maintain the dikes according to their vegetation plan. If they see that we are not doing our job, they will drop us out of the program. If some catastrophe comes along, they may not be so willing to help us because we didn't keep up our end of the bargain."

Someone comes out once a year to drive around and inspect the dike. Every five to seven years, a bigger group comes out to walk the entire 19.3 miles, taking pictures of everything.

"The road being on top of the dike offers access to over 350 structures on the outside of the dike that are outside the diking district," Aegerter said. "If we started taxing them then we would have to offer them protection. How do we do that? That would be so astronomically expensive and doesn't work."

"So long as we pass our inspections," Aegerter said. "Our last inspection, we passed."

Opportunities to serve the district 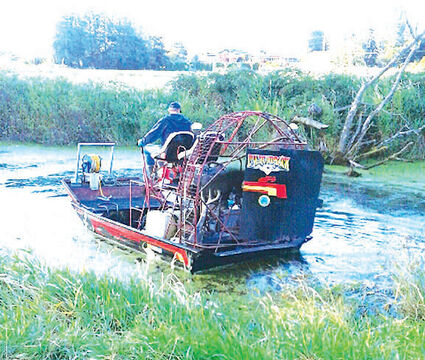 The diking district has three commissioners, and they split their duties, Aegerter said, checking the pump houses, driving around weekly to check for problems, talking to landowners. They hold meetings once a month.

One of the commissioners wants to retire soon, and Aegerter says they hope to find someone in their 30s or 40s who is willing to replace him and stick around for a few terms.

They are also looking for volunteers or part time employees to run machinery, who know something about electric systems, plumbing, or welding.

Their volunteers are getting older, he said; some of them are in their 70s. The district would like to find local people to fill those roles, so if they run into a problem in the middle of the night, they aren't making a call out to someone in Longview who isn't invested and won't arrive until the following morning.