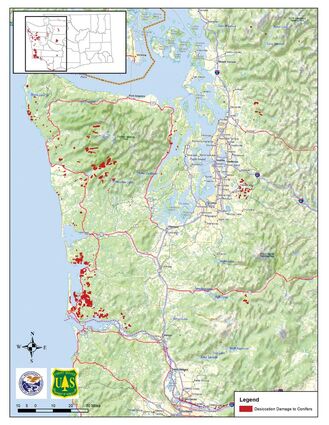 In summer 2021, from June 26 to 28, an extreme heat wave hit the Pacific Northwest. Known as a "heat dome," it caused damage to new foliage and buds of several conifer species across at least 84,000 acres in western Washington.

This heat wave was unprecedented in the region's history. Temperatures steadily built up to extraordinary all-time high records: 108 degrees Fahrenheit in Seattle, 116 degrees in Portland/Vancouver, 108 degrees in Arlington, and an unbelievable 110 degrees in Quillayute on the western Olympic Peninsula – smashing its previous all-time high by 11 degrees. Ongoing research is connecting the event to human-caused climate change (https://esd.copernicus.org/preprints/esd-2021-90/).

During this event, darker-colored foliage in direct sunlight reached even higher temperatures than the air around it, causing desiccation, or loss of moisture, of foliage exposed to the afternoon sun. This heat/sun scorch, also known as needle desiccation in conifers, was especially notable on the southwest and western sides of tree canopies, on south- and west-facing slopes, on younger trees, on trees with more sky exposure, and on trees closer to the coast.

Approximately 84,000 acres with this type of damage was recorded by the 2021 aerial survey. The highest concentrations were on the west side of the Olympic Peninsula, in the Cascade foothills areas of Snohomish, King, and Lewis counties, western Pacific County, Wahkiakum County, and southern Clark and Skamania counties. The extent of damage was likely underestimated by aerial survey because crown discoloration was difficult to see by observers looking to the west and south.

The long-term impact of needle desiccation is not well studied, and it is assumed that larger well-established and otherwise healthy trees will be able to recover from this desiccation event.

Over the winter, foliage of impacted western red cedar still remained brown on branch tips. It will be difficult to know whether or not damaged branch tips have died back until the flush of new growth appears in spring. In many of the impacted areas, some western red cedar have already been experiencing top-kill, branch dieback, and foliage loss in recent years, primarily due to ongoing drought impacts. The desiccation damage may contribute to ongoing decline at some of these sites.

Damaged branch tips on Douglas fir and western hemlock were noticeably missing foliage, and the majority of buds examined on these branches were killed. The heat was so severe that many new cones were damaged and even thin twigs at branch tips were wilted by desiccation.

In mature and pole-sized trees, this type of damage is unlikely to lead to whole tree mortality, especially since north and east sides of crowns were mostly undamaged. Any branch tip and top dieback will likely be noticeable for several years until adventitious buds and twig growth from inner branches obscures damage in a few years.

In some cases, it's possible the added stress from this event and recent severe drought years could lead to an increase in attacks by opportunistic insects and pathogens. For young seedlings and saplings, especially in sun exposed plantation sites, the likelihood of mortality from desiccation damage is much higher.