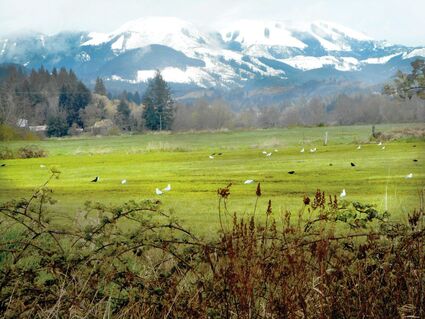 Photo of the Week: It's hard to get grass cut when it rains and sleets and snows in April. I'm hoping, dear readers, that you won't judge me as irresponsible if my yard appears to be more field than yard. Not only was there snow, as seen in the photo looking north off Covered Bridge Road, but a tree in my front yard also came down last week. It just leaned over in the wind and landed in the yard without touching the house or decks. I'm so grateful for that. I tried for a couple days to find someone who might want it for firewood. After all, most of my neighbors are retired loggers. But they are more discerning about firewood than I realized because they wanted to know what kind of wood, how healthy, and so on. Eventually I hired Tyson Vogeler to bring his small Kubota machine over to lift that tree up and take it away. I love trees so it will be missed but I'm so glad it missed my house. Thanks, Tyson!

Naselle Youth Camp: Lisa Nelson, Naselle/GRV School Superintendent reports, "There are 27 residents as of this month's count at the Youth Camp. I don't know anything new. We're trying to plan for the remaining months and NYC is not projected to get any more students. Camp resident numbers could be in the high teens by summer." This transition seems to be coming gradually, which is not surprising because it's a big change for everyone involved. Remember the regular monthly meeting of the Nasalle/GRV School Board on Tuesday, April 19 at 6:30 p.m. Your presence would not only give you an opportunity to ask questions, but it will also let the board know the community supports them with the challenges they are facing.

Grays River Roots: Often I hear comments about Grays River Valley folks being descendants of Swedish immigrants. Yesterday I went through the folks in the "Water Under the Bridge" book by Ruth Busse Allingham to check on that. Bonnie Wendelin Linquist who lives near the bottom of KM on her family's land once told me she was Polish. She mentioned others, too, that were Polish such as Gloria Clark. Her Uncle Johnny King was prominent here, as well as her mother, Virginia Wendelin, sister of Johnny King. Marie Klint Fauver (blue house to left at bottom of KM): Her family came from Sweden in 1886 and lived at Salden's Railroad Camp (Blue house was original Superintendent's house where Marie was born and lived there all her life); Robert Michael Pyle purchased the original Ahlberg home in 1978 from the Sorenson Family, descendants of H.P. Ahlberg who came from Sweden in 1885; Harry and Bob Larson's family came from Sweden in 1889; John King's grandfather, Vladislaw Kucharske, came to America from Poland in 1888 and changed their name to King, the translation for Kucharske; Virginia Wendelin, sister of Johnny King, and mother of Bonnie Linquist, are all descendants of Vladislaw. Jacqueline Erp Ford said, "My German grandmother, Margaretha Brix, married Joachim H. Brix in 1856. They were married at the home of her parents in Grays River in 1891." Further down the valley near Meserve Park, Imogene Meserve Mathiesen shared her family story. "Our grandfather, Solomon Smith, was born August 10, 1839, at Williamstown, Massachusetts, Berkshire County. Our forefathers were Puritans, connected with the Guilds, Hatches, and Colemans who came over on the Mayflower and settled here with their families." So her family was from England. Just these few names and families represent what our ancestors brought here, their cultures, languages and skills. As new folks come into the area, let's welcome them for the gifts and stories they bring.

Be a Volunteer: Last week, Kay Chamberlain mentioned in her column that one way for new folks to get involved in their new community was to volunteer at various organizations. I agree with Kay. Small communities like ours live on volunteers. I'd like to suggest that it might be a good idea if an organization could sponsor a Volunteer Fair providing non-profits, Fire Departments and the Sheriff's office an opportunity to let everyone know what their purpose is and what kind of skills they need so everyone can decide where they would like to volunteer. There could be one on each side of the county, if needed, but let's provide every opportunity to welcome them here and invite them to become involved.

April 9: Easter Craft Day at Johnson Park: All sorts of crafts for kids and their families: 11-2.

April 16: Easter Egg Hunts -Two hunts will be held on Saturday, April 16. The first one will be at the Naselle Football Field at 11 a.m. This event is for toddlers through grade 5. It's fun to bring a camera for that one. Sponsored by Finnish American Folk Festival and Naselle Education Foundation. The second is for grade 6 and above at Okie's Field at 9 p.m. Bring a flashlight.

April 19: Naselle/GRV School Board meeting at 6:30. Naselle Youth Camp closure and RIF process will be discussed at that meeting. Lisa Nelson, Superintendent, will have a resolution for board approval.

April 30: The Naselle Lutheran Church will sponsor their annual Spring Festival from 10 to 2. They will offer salads to go, baked goods, quilts and handcrafts, and plants and flowers, all made or grown in Naselle. Proceeds are dedicated to the roof fund and local charities. For questions about the Spring Festival, contact Sherry Hartline at (360) 484-7258 or email: nasellelutheranchurch@gmail.com.

May 12: Mother's Day Chicken Dinner at Rosburg Hall. Fundraiser for the Rosburg Hall Community Club. Proceeds will help maintain the building. Great idea for families to treat Mom so she doesn't cook that day!

Word for the Week: Home