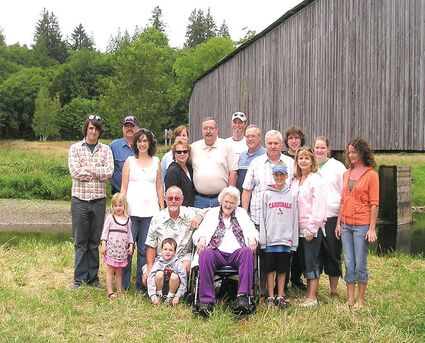 At the 2006 Covered Bridge Celebration, the family of Marjorie Elder Kraxberger gathered with her for a photo.

Photo of the Week: The family of Marjorie Elder Kraxberger gathered with her for a family photo in 2006 at a Covered Bridge Celebration. For Finns, family is probably the most important value. As an illustration of that, Marjorie's photo shows how important she was to her family.

Appelo Archives Treasures: At the Archives in Naselle, there are so many things to enjoy. I worked there for many years helping Carlton Appelo establish the center. I went through many of Carlton's collections in those years. I enjoyed helping with his own projects, one being recorded interviews with folks gone now, but represented well in the many interviews he did. They are available on CD's to listen to, and I think they will be in a digital format in the future. I myself enjoy looking through the written interviews often. Here are stories from Rosie Johnson and Carlton during his interview with her.

Rosie's story: My grandparents, Nestor and Hulda Wirkkala, ran a boarding house in Astoria before they bought a farm in Deep River about 1908. The farm was near the Deep River Church. Grandma didn't like farming. She wanted a hotel, so when the Shamrock Hotel in Deep River was for sale in 1917, they bought it. At that time, it had a saloon in it. Grandma ran the hotel and Grandpa was a fisherman. The woodshed was next door, and right next to that was the Deep River Sauna, an adjunct part of the hotel. Grandma Wirkkala fell and broke her hip in 1932, and that's when my mother took over running the Shamrock.

The hotel itself was built on pilings right over the river. There was a cement floor in the basement with a hole in the floor so they could hose out the basement when it needed cleaning. The water would drain through the hole. Well, we fished through that hole. And the cats would always gather around when we fished. Then there was Fred Pentti's Pool Hall. He lost a leg in an accident logging, and the loggers helped build a pool hall for him so he would be able to make a living. The West End Pool Hall was just across the road from the hotel. He sold beer and pop, cigars and peanuts. He had one big pool table and a couple card tables.

My mother recalled that when my sister Jeannie was real little, one morning as she looked out the hotel window she said, "It's just a beautiful day out there. The sun is shining, and the birds are singing and all the drunks are going to Pentti's. In 1946, Fred died. I remember riding up to the Deep River cemetery for the funeral. John Harju was one of the pallbearers and I recall him singing, "You are my sunshine." He wanted Rev. Koven to sing with him, but the good gentleman declined. That was my first funeral, you know, and I thought it was kind of humorous. Later, I learned that some of his pals had helped dig the grave. Fortified with three jugs of wine, their accuracy at spading out a rectangular hole was somewhat off, and the excavation turned out to be almost round. A lot of people were there and Rev Koven did the graveside service. Not missing the opportunity to castigate sinners, he preached at length directing his message to the drunks that were in attendance. Tiring of the lesson, one of the gravediggers, seated there on the damp dirt with cap askew, muttered in Finnish, "Come on Koven, quit giving him hell and sing him another song so he'll slide into the grave a little easier."

Carlton had his own story at that point: There was a guy, I've forgotten his name now, but I think he used to go to Seaside to that loggers show. One time he climbed up hand over hand on one of those cables that were holding a tree up, and he was pretty plastered, and he got up about 30 feet. Finally, he got tired and he kind of let go and landed on top of somebody's car and just smashed the whole top down. Another thing happened, he was there at the pool hall and kind of bragging about how tough he was. Mrs. Sophie Wirkkala came by, Harvey's mother. And she was kind of a small woman, about 5 feet 2 or 3 and kind of a quiet lady and she looked like she didn't have too much meat on her bones. Someone said to this man, "Why don't you give her a nice handshake?" "Well, I wouldn't hurt that old lady," the man said. "I wouldn't do that." "Just ask her." So, they went over and told her in Finnish, "Give him a good squeeze on his hands, 'cause he needs a good lesson." She'd been milking cows all her life and she almost broke his hands. Pretty soon he had to yell at her to let go. And she was just kind of giving him a good healthy handshake. She won the match. She didn't know what it was all about, but she said she just "squeezed as hard as she could like she was milking a cow."

April 30: The Naselle Lutheran Church will sponsor their annual Spring Festival from 10 to 2. They will offer Salads to go, Baked goods, quilts and handcrafts, and plants and flowers, all made or grown in Naselle. Proceeds are dedicated to the roof fund and local charities. For questions about the Spring Festival, contact Sherry Hartline at (360) 484-7258 or email: nasellelutheranchurch@gmail.com.

May 8: In honor of Mothers, a chicken dinner at Rosburg Hall. Fundraiser for the Rosburg Hall Community Club. Proceeds will help maintain the building. Not on Mother's Day officially, but a meal meant for families to celebrate their mother the Sunday before official Mother's Day.

May 28: Bingo at Rosburg Hall.

Senior Lunches: The Senior Lunch Club meets on two dates each month, the first and third Wednesdays at noon at Rosburg Hall. In May, Club lunches will be on May 4 and 18.

Word for the Week: Family.