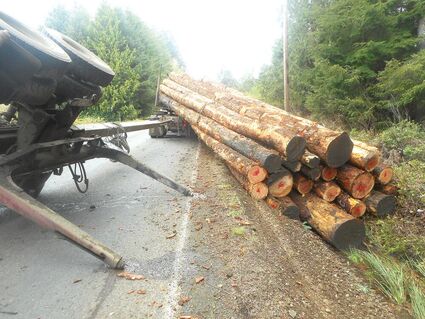 A Jerry DeBriae Logging Company log truck lost its load Tuesday after evading an oncoming vehicle that was over the center line on SR 4 just west of Rosburg. According to the Washington State Patrol, the log truck was headed west while a small, black sports car was headed east. The black car headed into middle of road, so the truck driver tried to move his truck into the narrow shoulder area to avoid hitting the car. The driver kept the truck on the road while load was leaning over. The truck fishtailed and stayed on the road, but the load of logs went off into the ditch. The load held together, and the truck was unharmed. State troopers on site said the truck driver was not at fault. The black sports car continued without stopping. Photo by Karen Bertroch.