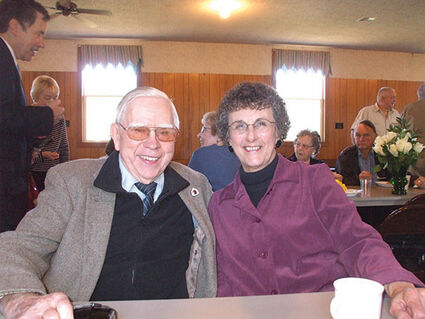 Although I purchased all of Carlton's phone books with the historic supplements, I did not get to know him until the late 1990's while visiting with Glenrose Hedlund in Deep River. My mom, Irene Upton, who grew up in the Grays River area, knew the Appelo family and when visiting the area over the years, we had stopped at Deep River to visit with Carlton Sr. and at the Grays River store to visit with Agnes.

My Smalley, Upton and Kessell roots go deep into the Grays River valley and surrounding areas. I had the pleasure of meeting Carlton and his wife at a Grays River Covered Bridge festival in 1994 and was impressed with his recall of local history and my family history too. Mom had passed away in 1988 and Carlton helped me identify some of the old photos in her albums. 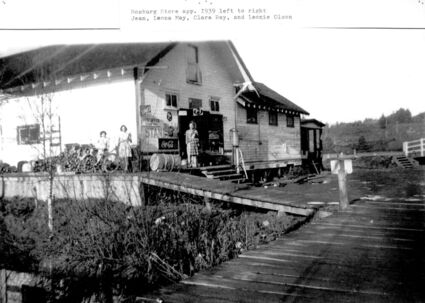 The Rosburg Store in 1939 located on the bank of the Grays near the Rosburg Bridge. Courtesy of Bonnie LaDoe.

Glenrose's wonderful, homey kitchen was always open to any friend who happened in the back door. And Carlton was a frequent visitor. He and Glenrose were old friends having graduated high school in the same year. Carlton's belly-laugh stories told over a cup of coffee in her kitchen brought out a side of him I had not known. Not only a great historian, he was an accomplished storyteller as well.

When Carlton's May 12th birthdays were being celebrated at the Archives Cafe over the years, I always tried to be there as I could celebrate his and my May 15th birthday as well. As I have done stories on local history such as the wreck of the Welsh Prince and my grandfather's fish traps, Carlton's research has been a valuable tool. I know his well researched work will continue to inspire other local historians and story writers. I wish I had thanked him for accepting me as "one of the locals." Even though I never lived in the area, my heart belongs there. I think he knew that.