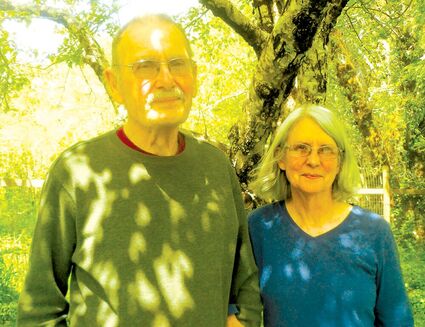 Jack and June Sharbach from Oneida Road are standing in their apple orchard.

Photo of the Week: Jack and June Scharback of Sisson Creek on Oneida Road. Life is taking on momentum now that we're heading toward June. Everything in my yard is "Coming up Roses" from "Gypsy" the musical, except my roses. I think the tips have frozen one too many times. But to say I had a great day today gives few hints of today's happy adventure driving out to "the end of the road" called Oneida. I sat for two hours with Jack and June Scharbach whose house is reached by walking across a plank bridge over Sisson Creek.

Jack and I talked and talked while June poured coffee and brought cookies for us. It was tough for her to get a word in, I am sure! I was honored to see where Jack bought his "eight or 10 acres" in the 1970's. He's lived out there for "around" 50 years. For the first eight years there was no electricity or phone. Jack mastered carpentry while building his house, then started making furniture and selling it.

Jack is now 83 years old and still going strong. He is proud of the fact that he has walked the woods for miles all around his property and timber company property, too. And he's been lost more than once. I love all his apple trees that were everywhere. He told me he makes apple cider, leaving seeds and cores for the compost piles he's made. Over the years of throwing out those seeds, volunteer apple trees have grown just about everywhere. So he has lots of apple trees and lots of cider as a result.

He has several greenhouses where he starts tomato plants, as well as vegetable starts. Jack told me of his childhood in Mt. Angel, Ore., and his extensive studies in his early adult life. He was able to work in the summer to pay for tuition, so he attended college in Mt. Angel, then went to University of San Francisco and Portland State. He has two BA's and did work on a Master's, but that was never needed. Jack is a man of all seasons, interested in everything science, history and philosophy. For several years, he worked at the Naselle Youth Camp as a counselor.

To many, Jack may seem off the mainstream because he is an isolationist who thinks for himself and still is learning his way through a large book collection scattered throughout the house. I would say he's what we used to call a "free thinker." He and June have been married for 26 years. They are clearly a good match. She started life in Wyoming, then went on to college in Great Falls and Missoula in Montana, then to Long Beach and home to Oneida.

Jack gave me a wonderful history of his life and tour of land. As I walked back over his plank bridge to "the world outside," I felt a bit sad. Last week I decided to call and ask if I could come out for an interview partly because I wanted to see what was at the end of Oneida Road and partly to see new faces and hopefully make some new friends. I think I succeeded in all that and I'm grateful for the visit.

Driving on out of Oneida, I realized how much Jack and June's lives have changed. At one point, there is a lovely new electronic gate I had to enter to get out to Oneida. It's just before a new house, and there are more houses past that. Jack and June live a mile further out past the new gate and new homes to the very end of the road.

The view of the Columbia is stunning from the area of lovely new homes with groomed yards and gardens. It's clear the drive is well worth it. While it would be ideal to get PUD water connected to all the homes, large tanks of water behind the homes are adequate till the PUD is able to accommodate all the houses out there. The privacy and views offset having to buy fire truck tanks of water from the fire department. I felt privileged to be able to visit with one of the residents who lives in a new home with that view as well as to drive further out and visit with Jack and June and their apple trees. We who live in this beautiful area on the Lower Columbia are truly blessed.

News of the area: The Grays River Habitat Enhancement Group with their new board members met last Tuesday to re-group and get started. One of the first things they did was change the day for their meetings. They will now meet on the second Thursday of the month. Krist Novoselic and Charlie Shumar, the new board members, had a good-sized group attending. The next meeting will be June 9 at Johnson Park at 5:15 p.m. Anyone interested in becoming the third board member can send a resume to Krist at: lgrhed@wwest.net.

Carlton Appelo's 100th birthday party was held on May 12 at the Archives Center he founded almost 20 years ago. A group of friends and customers of the Appelo stores met to tell stories of Carlton and his wife, Berenice. The gathering was also a retirement party for Arlene Nelson who worked for the Appelo family for decades. A huge cake set the tone for the gathering, and Ken Bakken, son-in-law of Burton Appelo, gave a nice presentation and a toast to Carlton and Arlene.

I had a call from Rich Trachi from Puget Island. He is looking for a large building he could use for a year or so to store and work on his father's 50 foot wooden boat. If anyone out this way has a building where he could work and have plenty of room, give him a call at (503) 309-2035.

May 28: Bingo at Johnson Park.

June 1: Naselle/GRV School's Evening of Excellence will be held June 1 at 7 p.m. in the HS Commons.

June 11: Graduation will be at 4 on Saturday in the school gymnasium.

Word for the Week: Promise.