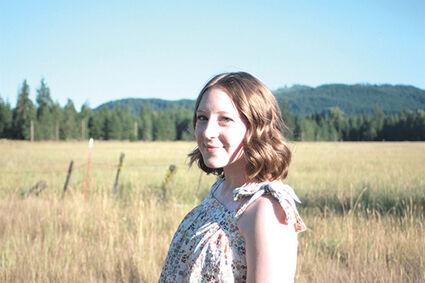 Grace Hunt, daughter of Amy and Ed Hunt and granddaughter of Hank and Linda Nelson, has worked as hard as could possibly be expected in her last year in high school.

With not only her senior year to complete, she has spent the last two years in high school also completing an AA degree from Grays Harbor College in the Running Start program. With completion of two years of college work as well as her senior year's work, she will graduate with her high school diploma and her AA degree together at graduation on June 11.

Grace has done her Running Start work from home with her computer, causing some changes in the family's routines. At times she had to ask that the house stay quiet while she works and takes tests.

Grace decided on Oregon State University as the next step in her education. She made this decision based on the zoology program available on campus in Corvallis, Oregon. She has been actively engaged with large animal work by helping her grandfather, Hank Nelson, with his herd of Hereford cattle next door to the Hunt house. She has made spreadsheets to keep track of vaccinations, illnesses, new babies and other details for every animal. She has witnessed and, if necessary, helped with calves being born. She has named the calves and helped raise them.

Grace is grateful for her years in 4-H, not only for what she has learned about raising animals but for other programs in 4-H, such as leadership.

Grace likes the distance from Corvallis to Grays River so she can come home easily for holidays with her family, including her sister who is attending Washington State University in Pullman. She looks forward to getting involved in OSU's student activities since over the last two years she had little time to engage in much social life. She recently learned there are two other students from home attending OSU, too.

Grace expressed deep respect and gratitude for her parents over these past two years. Her parents encouraged her in everything and never compared her with her sister which was important to her. Most importantly, her parents made it clear they trust her to make the best choices for herself. Whether Grace eventually studies animal husbandry or environmental science and research, she will be a winner and another fantastic alum for Naselle/Grays River Valley High School.