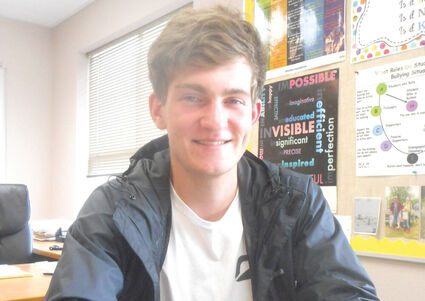 While Josh Chadwick's GPA is the second highest in the senior class, there is only a tiny speck between the first and second GPA's. His downfall, he admits easily, was calculus. Josh has a very active mind that wants foremost to learn about things that interest him, like computers. When around six years old, he learned computer technology. Then he took lessons in coding and building games on-line. He has always loved computers, so for him to study computers and robotics in college is a perfect choice. He is a very mature student with a plan for his life that he will most likely see happen sooner than any of us would expect. He was in the Running Start program with Grays Harbor College for his junior year, but decided he wanted to fully experience his senior year so he didn't enroll for this year. His favorite sport is track and field. His favorite instrument is the trumpet and he's good enough to play in the Ilwaco Jazz Band. His schedule includes band first thing in the morning at Naselle, then driving later in the day to Ilwaco for jazz band. Realizing that jazz is a skill that not everyone can learn, conquering the trumpet is another example of his impressive ability to learn what he needs to know to do what he loves.

This young man is impressive. When he sets his mind to learning, he takes off like a rocket and designs the rocket before leaving. One can't help but be impressed. However, he is not only intelligent, he is also thoughtful and attentive to others. He will be fishing in Alaska this summer, which will be handy for tuition at WSU. He is taking his car so he can get around the area easily as it's assumed he will find another jazz band there, too.

Josh plans to attend Washington State University in Pullman studying robotics and computer science. He has been active with the robotics team and instructor Ron Wright has encouraged him and challenged him to do his own project. This young man's interest in robotics shows how important it is for students like him to have challenges.

When asked what he's most thankful for from his parents, he replied, "They trust me." They are accepting of his agile mind and plans and they accept his big ideas. He hopes to eventually get a job with a high tech firm after graduation, but I suspect there is a good possibility he will continue on with graduate work while he invents something. From there he will most likely start his own company building AI (Artificial Intelligence) pieces that will change our lives in ways we can barely keep up with. His mother, Amy Chadwick, is on the Naselle/GRV School Board, serving alongside Amy Hunt, Grace Hunt's mother. Both mothers are proud, of that we can be sure. Best of luck, Josh.