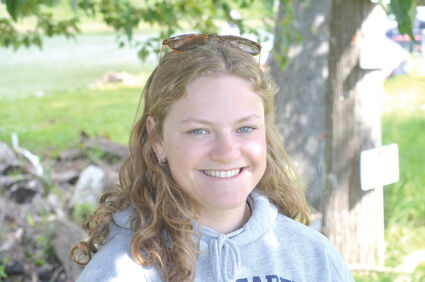 Megan Leitz has been named valedictorian for the Class of 2022 at Wahkiakum High School after maintaining a 4.0 GPA the last four years.

Her parents, Steve and Stephanie Leitz, never placed any importance on appearance, she said. Instead, they taught her that her most important tool would always be her brain, and that it will carry her, wherever she goes.

In June it will take her all the way to Annapolis. Leitz has been accepted to the Naval Academy, a place where she will get to practice many of the things that are important to her, including teamwork, service, and physical fitness.

"It creates so many opportunities," Leitz said. "Every single door I could have wanted is open to me now."

There have been a series of things over the years that led her here, but when asked why a service academy and not a university, Leitz replied, "The sense of family, the physical aspect, which I love, and the duty of it."

"Community service has been a huge part of my high school experience," she said. "I want to be able to give back, especially with all of the political turmoil and everything that's happening. People are forgetting where we came from and why we are here. I want to bring appreciation to that, in a way."

"That's the goal," Leitz said. "That's a lot. It's hard to do that. But I feel like serving others is to serve yourself. You feel so good after you help somebody. Even if you think, I don't want to do this. I don't want to go plant trees for an hour. It's going to be miserable. After you are done, you feel really good."

Several of those 300 hours came while working as a referee for youth basketball tournaments.

"It's so fun," Leitz said, "but it's funny, because when I'm in the student section, I hate the refs, but when you are actually doing a game, it's so hard. It gives you an appreciation for what they do, but I still heckle them a little bit."

Leitz has been an active student and athlete. She participated in volleyball, basketball, and track all four years of high school, is the ASB Co-President, and president of the Key Club, which she joined as a freshman. She also competed in extemporaneous speaking for the FFA. And last year, she became a member of the LEAP (Leadership through Education, Activities, and Personal Development) Committee with the WIAA (Washington Interscholastic Activities Association).

The committee met every five weeks to talk about issues in the WIAA, Leitz said. It also gave her an opportunity to shadow the executive director, a job she thinks she might like to have one day.

Leitz enjoyed seeing firsthand how they put on state tournaments, grappling with the financial, economic, political, and social aspects of the job.

Plus, she said, "Sports are such a huge part of my life."

She knows already that keeping her body healthy keeps her most important tool, her mind, healthy too.

"You don't quite get the feeling that you get in the middle of a big basketball game, or right after you win a volleyball game, or after you finish a run in anything else," Leitz said. "I've never had that experience, or that emotional high that I get in sports, anywhere else."

She thinks a lot about something Rob Garrett, her basketball coach, said to her one time. She had lost her spot in the starting line up after being late to a game.

"Sometimes people work really hard for their dreams, and they never come true," Garrett told her.

At the time, it really upset her.

A couple years later, she was feeling a bit down. Her final season of volleyball or basketball was coming to a close, and she was certain she wasn't going to get into the Naval Academy.

On Senior Night, she received her Letter of Assurance from the academy and a card from Garrett which read, "Sometimes people work really hard for their dreams and they don't come true, but they make new dreams, and go out and crush them."

"That's probably something I'll carry with me for the rest of my life," Leitz said. "I don't think people quite understand the impact a coach has on people's lives. I want to thank him for that."

After she graduates, she will serve in the Navy for at least five years.