Finnish-American festival back for 2022 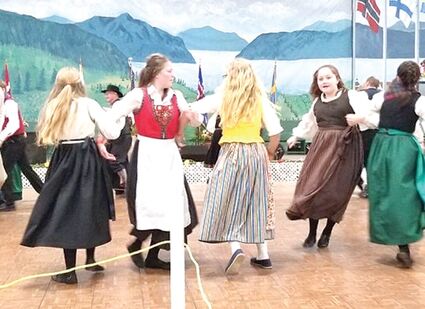 The Naselle Finnish/American Folk Festival (FAFF) is pleased to announce the upcoming folk festival scheduled for the last weekend in July, the 29th, 30th and 31st.

There will be crafts, food demonstrations and sales, movies, games, lectures and all kinds of performances, workshops and dances. FAFF will once again offer a salmon dinner on the 30th, sponsored by the Grays River Grange.

The 31st will feature a bilingual church service with special music and a delicious coffee hour afterwards put on by the Naselle Lutheran Church.

Finlandia Foundation performer of the year Eeppi Ursin, a platinum-selling award -winning singer, songwriter, and pianist, will perform on the 29th and/or the 30th at 7 p.m. Her new album: 'Speechless,' a combination of pop, soul and singer-songwriter traditions will be on sale in the Tori (market).

Toby Hanson and his 'Smilin' Scandinavians will provide music for the Finnish/American Folk dance on the 30th, 8:30 to 11:30 p.m. The band demonstrates talent, professionalism and humor with dancing music for all ages. Toby Hanson is the bandleader, accordionist and singer; other members include two-time Washington State Tuba Champion Mike Woolf, drummer Erick Cohn, banjo/guitar player Glenn Dudley and clarinet/saxophone virtuoso Eric Likkel. This band draws from a collection of lively polkas, old-time country and big band swing.

FAFF will honor Naselle musician Wilho Saari, who passed away this year. He was a national award winning master Kantele player, composer and teacher for years. The kantele is the Finnish National instrument. We were honored and privileged to have him live and perform in our local community.

Valerie Blessley and her trio "Soittorasia" will honor him with their kantele music and workshops. The trio consists of Valerie on kanteles and woodwinds, Elisa Boynton on violin, kantele and jouhikko, and Jennifer Pratt-Walter on harp, kantele, percussion and woodwinds. The trio will play Finnish, Nordic, classical as well as original music. The group will perform both Friday and Saturday. They will also offer beginning kantele lessons on Saturday.

Carl Wirkkala and his band, 'The Whistle Punks', will return to perform at our festival. Wirkkala hails from Castle Rock and has deep family roots in the Pacific Northwest. He brings to life tales of ghost towns, trains and lonesome drifters through his music. Carl enjoys writing songs based on the stylings of Johnny Cash, Waylon Jennings and Bob Dylan. Several of his songs detail scenes from the different regions in Southwest Washington. He has been writing and performing for the past 20 years.

His newest album features his new band, 'The Whistle Punks.' This group of talented musicians comes from the Vancouver/Portland area. The band consists of Carl on lead vocals and guitar, Chad McAllister on electric guitar, Christine McAllister on bass and backup vocals, Jesse Cunningham on pedal steel and Don Lawry on drums. They will perform both on Friday and Saturday.

FAFF is privileged to have Kim Angelis and Jennifer Goodenberger as a part of the festival this year. Angelis is a world-renowned violin player, and Goodenberger is an accomplished pianist. They will play both Friday and Saturday. Kim is an award-winning composer and violin virtuoso and will share original compositions. Her music brings audience members to their feet.

Goodenberger is a solo and collaborative pianist. She will share original compositions and arrangements of folk and Celtic music.

The festival will showcase the Viking Nordic Scandia dancers from Astoria. They will perform on Saturday afternoon. This dance troupe has been dancing for over 50 years. The group consists of three groups: the Nordics, 2nd to 6th graders, the Vikings, 7th through High School and the adult group. This is a dance performance not to be missed!

Skamokawa Swamp Opera is an acoustic band of Wahkiakum County musicians that have recorded everything from early Americana to rock and opera. They are known for their vocal harmonies and unique arrangements on guitar, cello, banjo, mandolin, mandocello and percussion. They have been featured in multiple Finnish/American Folk festivals as well as others. Their 2020 album, Foxglove Streets, features all original music, much of it rooted in Southwest Washington.

Renowned chelloist Dale Bradley will perform music by Jean sibelius and other Finnish composers. Bradley, from Springfield, Oreg., was a University of Oregon music graduate and a longtime member of the Eugene Symphony and the Oregon Mozart Players. His compositions and arrangements have been played in all kinds of venues on the west coast, from retirement centers to the LA Philharmonic. Bradley directs the Springfield Youth Orchestra and teaches cello, bass and guitar in his own private studio.

The festival will also offer a variety of interesting speakers, workshop providers and presentations.

--Greg Jacobs will speak about the Kalevala, the history of the 'land of heroes,' the Finnish national epic, with pictures and a slide show. Born and raised in Astoria, he is an Emeritus Professor of English, retired.

--Jim Kurtti. Jim was born and raised in Michigan's Upper Peninsula. He attended Suomi College, University of Helsinki and University of Minnesota, where he graduated with a BA in Finnish Studies and Social Work. Kurtti was appointed the Director of the Finnish American Heritage Center and Editor of The Finnish American Reporter at Finlandia University, positions he held until retirement in 2021. He will speak about "Love Letters from Finland," a family history revealed through letters from Finland to Arvid Kallunki. He will also speak about and show a film titled "Sirkka", a documentary of one of Finnish America's most amazing women.

--Karl Marlantes, author of "Deep River," the New York best-selling book about life in the local Finnish community in the late 1800's, will speak and autograph copies of the novel.

--Other traditional activities include the Paavo Nurmi run, designed for participants of all ages; games such as Frisbee golf, the traditional wife carry contest, Nokia phone throw, the boot toss contests, and home-run hitting contest.

See the FAFF on their webpage at nasellefinnfest.com and also their Facebook page for more information.