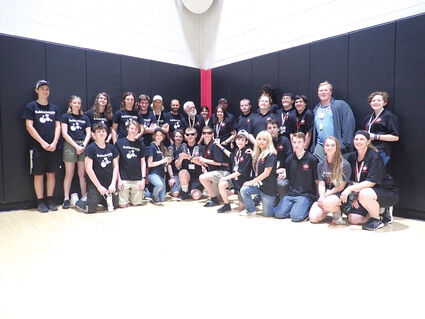 The Naselle Bubbleheads and the Wahkiakum High School and 4-H Mecha Mules celebrated their success at their first ever international SeaPerch underwater robotics competition in Maryland on Saturday.

Local robotics teams returned from Washington D.C. and Maryland with awards, trophies and some wonderful memories after touring the capitol and competing against 137 teams from around the world in the SeaPerch underwater robotics competition last weekend.

The Naselle Bubbleheads placed sixth overall in the open class at the international event. They placed second in engineering design, got a fourth place finish for their team video, placed sixth in the pool mission course, and ninth in the pool obstacle course.

The Wahkiakum High School and 4-H Mecha Mules placed second overall in the open class. Their engineering design got a fifth place nod, as did their team video. They placed second in the pool mission course and third in the pool obstacle course, and were recognized for real world innovations.

The following are summaries of daily updates from the Mecha Mules advisor, Ron Wright.

Last Wednesday, the robotics team toured Mount Vernon for a few hours, enjoying a float down the Potomac River.

"There was enough of a breeze that it wasn't too uncomfortable sitting on the top deck to get panoramic views of the buildings, very fancy houses, and forested areas along the river bank," Wright wrote.

Afterwards, the team headed back to their hotel and began preparations for the tournament. Everyone had their orders. One group unpacked and rebuilt their robot while another planned their presentation. A third organized reconnaissance. The assignment? Watch other teams in order to improve. How were they increasing speed? What designs could be emulated? What could the Mecha Mules learn about control cords or grippers and claws? What could be gleaned about teamwork?

The Holocaust Museum is free, Wright said, but tickets are necessary.

"Visitors may go in thinking they will be just doing another 30-minute museum tour," Wright wrote. "It just is not that way. We were there for over two hours-very engaging, indescribably horrific, and positively hopeful. The team agreed that every person should visit."

As for the Lincoln Memorial, Wright described it as the "most imposing, grandest memorial we visited."

"The words on the wall of his second inauguration speech are even more powerful than his Gettysburg Address," Wright wrote. "And yes, the Reflecting Pool really does reflect the Washington Memorial in a way that explicitly states: this was all planned out by an artist who is an architect and builder. And, the WWII Memorial is such a crafted piece of the Mall as it anchors the other end of the Reflecting Pool in a way that leaves simple people like me in absolute awe. I do not have the words. You do have to visit someday to feel the effect."

The Mecha Mules met the Naselle Bubbleheads at the Hard Rock Cafe that evening to enjoy a bite to eat, and while there, rookie coaches had to earn their stripes with a song.

Everyone joined in for a round of "You Are My Sunshine," in honor of the soaking they all received that day in a downpour that gave them a momentary respite from the heat.

On Friday, the Mecha Mules moved from the hotel to the dorms at the University of Maryland. The day began with covid-19 tests, which were negative, and checking out of their hotel, followed by a bit of fun. The coaches had planned routes all week long, but this time, the students got to do it themselves. How would they get to the dorms, lunch, and to the Mall using the Metro?

"They earned a near-perfect A," Wright wrote. "No errors in navigation, picnic on the Mall, perfect arrival time at the University of Maryland campus. I took off a point for the group being split when crossing a street."

After they checked into the dorms and ate dinner in the dining hall, preparations for the next day's competition began. Some began scouting, talking with other teams about their robots. Others worked on the presentation or readied the robot.

On Saturday morning, competition began. The Mecha Mules presented their engineering report to the other teams and answered questions. Scouting continued. There was an inspection of their robot after lunch, and runs for the obstacle and mission courses began around 3:45 p.m.

When awards were announced, "we were stopped cold," Wright wrote.

"It is still hard to wrap our heads around it," he continued. "One hundred thirty-seven teams were there in three divisions, from all over the world, and we are in the Open Division, presumably the hardest. Southwest Washington comes home with three trophies. In our first year doing SeaPerch. Wow."

During the debrief, the team talked about what they had learned in competition, in scouting, and how they might improve.

"Next season starts today for both teams," Wright said.

On Tuesday, members of the Mecha Mule team reflected on Washington D.C., the competition, and what it means for their future.

"It was really something special. That's going to be with me for the rest of my life," WHS sophomore Thain Russell said.

Russell will attend school elsewhere next year but plans to remain involved in robot design for the team. One day, he hopes to be a drone pilot for the Air Force.

"I took up programming quickly, and as the years go by, I'll try to get more into that," Sophomore Patrick Thompson said. "That's the career path I'm swaying toward."

Thompson enjoyed speaking to people from other countries and cultures and learning that sometimes his preconceived notions might just be wrong.

"Seeing all the monuments and being in that big town made me really happy," said Junior Kaiden Ray. "Taking a tour of the Capitol Building was really cool. Like knowing about the Statue of Freedom on top of the Capitol Building. Everyone would just overlook that as a piece of art on top of the building. I learned it actually meant something. It stood for the freedom of the country."

Ray found his biggest challenge at SeaPerch was talking to people. His job on the team as programmer doesn't usually involve very much interaction, and with the programming done, he was sent out to scout. On the bright side, he plans to keep practicing.

"Be prepared to go into a big crowd if you join robotics. If you think you are just going to make robots, you are going to talk to a whole lot of people," Ray laughed.

"I started doing computers because they are easier to work with than people," junior Alan Smith said, echoing Ray. "Now I'm in robotics and everything has to do with people."

Smith moved to Washington from Arizona in December and promptly joined the team.

"D.C. was really cool," Smith said. "There were a lot of awesome buildings, in the literal sense of awesome. Buildings and structures and history."

Smith was impressed with a team from San Diego, the Miramargineers, which took third overall.

"They've been competing for nine years, so to go through our first year and be that slight bit ahead of them was incredible," Smith said.

"I loved DC," Team Captain Arwynn Haney said. "I feel like we got a huge cultural experience, we got to be immersed in the history of our country and learn good and bad things. We also learned a lot about ourselves as a team. I think there were a lot more leadership opportunities on the trip. It was really amazing."

The sophomore was also really proud of her team.

"It was cool to see how well our team managed ourselves compared to the first competition I remember us going to," Haney said. "We really handled ourselves much more efficiently than when we started this year."

"My favorite thing was talking to teams from different countries, like New Zealand, Qatar, and Kuwait," he said.

"It was my first time on a plane," Junior Elijah Thompson said. "I was excited and scared at the exact same time." Elijah enjoyed seeing the robots created by other teams.

"There were some really high tech ones there," Elijah said. He also loved all the maps he saw in D.C., which he said were "very detailed."

"Elijah was our navigation guy for a lot of the time," Haney said.

Peter Vik, a sophomore, has been involved with robotics for many years. It was his first trip on a plane, but it definitely won't be his last. The take off and the landing were thrilling, and suddenly he's thinking about becoming a pilot.

Vik talked about how nervous he got driving the robot, about the adrenaline, and the shaking hands.

He wished he could have played it cool, but he still got the third fastest time.

"I think we could have gotten second place," Vik said.

"Next year," his captain, Arwynn Haney told him.

"I think it didn't quite hit Peter that we were at an international competition until he was driving," Haney said.

"It's a lot different from our Washington," Sophomore Reagan Hoogendoorn said of D.C.

She enjoyed going to Mount Vernon and she loved seeing the Washington Monument at night.

"It was nice and calm then," she said.

As for the competition, she really enjoyed the presentations.

"There were all sorts of people from other countries," Hoogendoorn said. "I liked the team from Qatar. They were so nice. Their country is known for hospitality."

Micah Johnson is home schooled and a senior. He enjoyed seeing the World War II Memorial and visiting Arlington Cemetery on Memorial Day.

"The competition was incredible," Johnson said of SeaPerch. "We learned a lot about teamwork. We learned a lot from the other teams. We talked to them about what they did with their robots and came away with new ideas. It was really cool making it to that level, getting to see all the teams from different countries, getting to watch all the teams' presentations."

"Just hanging out and talking about their countries and different communities and lifestyles was really cool," he added.

"This is our first year of doing the competition," Thain Russell said. "We have huge plans to get up in the ranking. We want to really improve. We want to send a huge thanks to the people who donated and showed support to us. To everybody in the county." 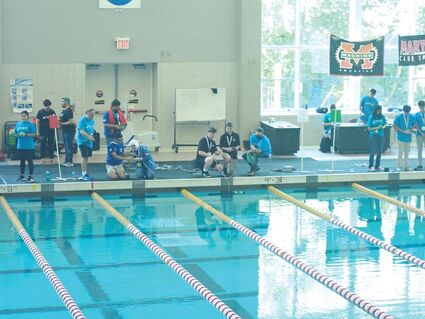 Wahkiakum High School and 4-H Mecha Mules team members Peter Vik and Nathan Garrett drive the robot through one of the underwater courses at the international SeaPerch robotics competition in Maryland on Saturday. Photo courtesy of Jessica Vik.