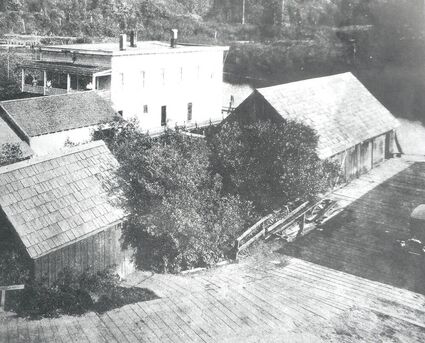 All over our west county area, the high grass is winning. Some farmers have started their first cut of the summer, but then the rain keeps coming and messes with the whole process. But on the other hand, Hank Nelson's calves are growing so fast we can see it driving by on the highway. Tyson Vogeler has goslings "on steroids" following him around all day. He may think they love him, but I suspect he's more of a mother figure meaning he's where the food comes from and they know it. Joanie Matthews' horses have sleek, shiny coats, then there are all the bird nests. You can hear the babies squeaking sometimes, then watch the parents coming back and forth and you see how hard they work to keep those babies full. Dad feeds Mom, then she feeds babies.

Last week, while talking with "Buckshot's" sister, Jean Wirkkala, curiosity tagged me about the Shamrock Hotel in Deep River. In the 1920s, it was always full of loggers and in those logger numbers, most residents and visitors were Finnish. I found another old copy of the booklet I gave Jean, "The Boarding House Finns," and started reading it. In the opening statement on the front page it states, "In this issue (August 1972), early Finnish boarding houses are brought out as social and educational hives where many emigrants were initiated into getting along better in the New Country. That went on in Americanized Finnish from busy kitchens to debating lobbies in the boarding houses." Right away the Shamrock is mentioned and a photo shows Mrs. Hulda Wirkkala waiting on loggers and other boarders. Also shown is her husband, Nestor Wirkkala.

"Deep in the old country wilds, the logging Finns put up winter camps much as American and emigrant loggers did in the Great Lakes region where harvesting and hauling of sawmill fodder was carried on after the Finnish fashion on a much larger scale through hard winters which firmed up marshes and made sledding out of logs easy, on easily constructed highways of snow. Finland's pioneer logging camps resembled those of all American logging from Michigan to the Oregon Country of big trees."

The Shamrock Hotel, one of several hotels with the Shamrock name, is mentioned as one of the better-known hotels in the area. In the small book, a Seattle researcher from 1971, Mrs. Annette Anderson, wrote a report on boarding houses in which she states: "The excerpt below is from a story by Mr. Osborn, editor of the Astoria Evening Budget, which I copied from an old scrapbook owned by Raymond Eskola of Seattle. It was compiled by his father, Charles Eskola of Astoria, who was the Deep River Correspondent for the Astoria newspaper, the editor wrote soon after the Harju Hotel in Deep River burned on January 10, 1915. The Astoria newspaper story, headlined, "GET ACQUAINTED – STORY OF A DEEP RIVER TRIP" reads: When the editor arrived in Deep River, he soon learned that by the recent burning of the Harju Hotel it might be doubtful whether a room for the night could be readily found. The Shamrock Hotel – which wasn't Irish, as the name might suggest, but kept by the Wirkkala family – was crowded. But they very soon routed out some male member and gave the stranger his room after seating him at a bountifully loaded supper table. On the walls of the room the Regular occupant's clothing remained; you could see the chain and outline of a big watch in the vest pocket as you lay in bed and wondered at this state of simple confidence in a person hitherto unknown. At the Shamrock, I found an old acquaintance, J. Henry Harrison. He introduced me to Professor T. Williams of Chinook. After Harrison left for his farm, I was up late into the night visiting with the Professor."

Mrs. Anderson's 1971 report added, "Another Finnish establishment was Carlson's Hotel and Boarding House in Naselle on the bank of the river. Carlson was a widower and cooked for the boarders. Eskola's scrapbook contains a note that the Lower Deep River farmers held a meeting at the Shamrock Hotel on November 4, 1916."

The 23 page booklet is educational as it illustrates with details, stories, names and dates. What a transition had to be made upon arriving in the Lower Columbia region as an emigrant. Realizing how important the boarding houses were for the new emigrants was an eye opener for me. How did early emigrants even know how to apply for citizenship, or speak English, or send a letter written in Finnish through an American Post Office? They talked to the boarding house women who helped them with whatever they needed to make a successful life in the New Country. The women nurtured, listened and taught them English. If you would like to see the booklet, I will take it to the Archives Center in Naselle so it can be put into the library. Speak to Anita Raistakka and she will find it for you. (360) 484-7103.

Now on to current news: Big congratulations to our Naselle/GRV students on the robotics team, who traveled to Washington DC and Maryland just before leaving on their senior trip. The Naselle robotics team placed second in the open class for their engineering design. Sometimes attending a smaller, rural school is the best of all possible choices. We are so proud of you!

I will be having lunch on Tuesdays around noon every week at the Archives Center. Let's talk history or whatever topic you'd like. Come and join me, then spend time at the museum.

June 11: Graduation will be at 4:00 on Saturday in the school gymnasium.

June 24-26: PIGYS (Puget Island Garage and Yard Sale) sales all over the Island.

June 25: The annual Finnish Midsummer Tea at the Appelo Archives Center at 2 p.m. that Saturday. Pre-sale tickets are $20 and at the door $22. Get tickets at the Archive Center or on-line at: AppeloArchives.org/TEA. Call (360) 484-7103 for more information.

Word for the Week: Hospitality.