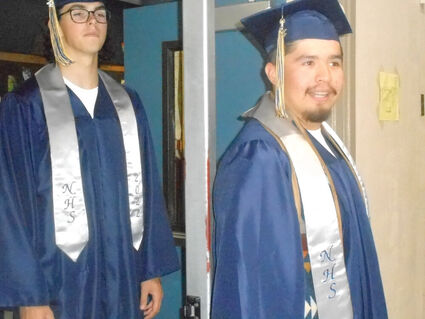 Trenton Stephens, left, and George Wilson prepare to enter at the start of the Naselle High School graduation ceremony.

Graduations are always fun and poignant.

The 2022 graduating class was especially impressive. In his closing remarks, Principal Justin Laine described what he was most proud of in this class. "They are extremely caring and compassionate, and I want to thank them for that."

He also emphasized their "academic excellence, athletic accomplishments, and various talents but I want to emphasize that what I am most proud of and what sets them apart" he said, "is their kindness, inclusion, citizenship, and respect. This was one of our highest achieving classes in recent memory. They were offered an additional $691,000 in scholarships. However, their citizenship and leadership far exceed their achievements and they will be dearly missed. From top to bottom-they are one of the nicest and most inclusive groups of kids that we have had in our high school."

The total amount of scholarship funding for the students was $343,000. Jayna Bradley will have access to $77,000 through the Montgomery GI Bill by enlisting in the Marines. Valedictorian Grace Hunt received $70,250 toward her college costs at Oregon State in Corvallis for her studies in zoology. Riley Thorsen will receive $62,500 from Oregon State to study medicine.

Ryan Duke Waltemate received $61,500 for his studies in computer science at Oregon State. Seattle Pacific in Seattle will be the home of Jack D'Agostino for his studies in Fine or Performing Arts with $42,000 in support. Jason Wayne Harman will receive $35,750 for his studies in forestry at the University of Montana in Missoula. Echo Sophia Cenci received a total of $19,500 for her studies in nursing at Dixie State University to forward her goal of becoming a traveling nurse. A major portion of her funding came from the Ocean Beach Hospital Foundation. Josh Chadwick and Grace Hunt also received the American Legion Citizenship Award. Joey Strange received the Bob Chamberlain Award, Peyton Dalton the Elenora Hillis Award, and Mia Watson the Patty Wiss Memorial Award. Theron Frame and Josh Chadwick also received music awards. 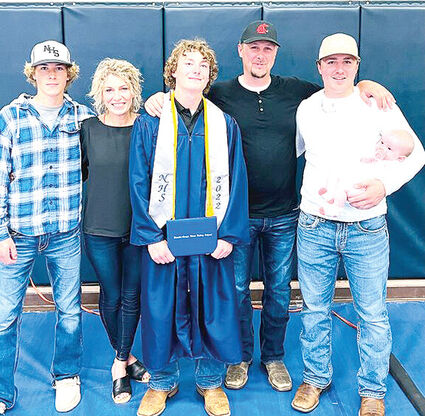 In her valedictorian speech, Hunt showed appreciation for her class for the "way we have loved each other this year." And she gave thanks to her parents who "always let her think for herself."

What a joy it was to see our community's seniors move on to the next chapter in their lives. We are all proud, wish them the very best and hope they come home often.