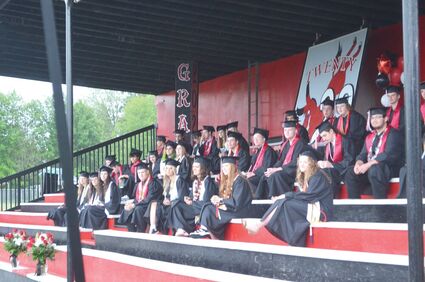 Friends and families braved a rainy hour on the football field to witness the 35 members of Wahkiakum High School's Class of 2022 make the transition from student to graduate on Friday night. Tents were erected and umbrellas dotted the field, and some in the audience made the best of their hoods and hats, or just endured or enjoyed the shifting, but generally wet, weather.

"The promise we made to be standing here as seniors was not an easy one to keep," Valedictorian Megan Leitz said, welcoming the crowd. "However, we persevered through those challenges, learned what we could about ourselves, the world, and each other, and laughed along the way. So here we are, and I am extremely proud of the people that we have transformed into."

"One of my favorite sayings in the time I have been a Mule has been 'Wa-Ki-Hi till I die,'" she added. "While we may not be walking her hallways every day anymore, may we always remember the memories made, the faces that passed us, and the knowledge that no matter where we go, we will always have a home in the stable."

Class Speaker and Salutatorian Gabe Moon quoted Michael Jordan. "Some people want it to happen, some wish it would happen, and others make it happen."

"I know that every graduate here can make their future dreams happen. So go out, do it, and live your adventure," Moon said.

He challenged his classmates and anyone listening to find something they enjoy for aspiration.

Landon Luce provided the closing remarks, proving to be a master of the last word.

He congratulated his classmates, remarked on their wizard costumes and cardboard hats, and teased his English teacher for leaving him in the waiting room on Zoom. He expressed the class's appreciation for everyone who supported them in one way or another over the last four years.

He spoke of freshman orientation where Principal Stephanie Leitz handed them mini diplomas that read "Your ticket to the future. Dream, believe, achieve."

"My dream after the first month of Honors English was to get out of this place ASAP," Luce said. "I believe there are others that could back me up on that."

"Oh yeah," one of his classmates shouted from the stands.

There were other roadblocks along the way, Luce said good-naturedly, including the valedictorian.

"Can any of you imagine what having a debate about the most random things every day with Megan is like? Because I sure can," Luce said. "She is very adamant about her opinions, and this is probably why she got into the Naval Academy. Mr. Stetzer was usually the one that instigated our debates. He would start off his physics class with something very subtle, like the formula to find the centripetal acceleration of a sphere. But that would usually lead to a very heated debate about whether or not Megan's sweater looked like an old man's coat or not."

After the teasing, he spoke of kindness and happiness.

"It only takes 17 muscles to smile," Luce said. "It takes 20 muscles to write your name. It takes 40 muscles to wink, and it takes 46 muscles to frown. A smile that is the one thing that is able to brighten a person's day in less than one second, and that is a philosophy that I have always believed in."

"It is up to you to live every day how you choose, and why not choose happiness?" he asked.

After the Alma Mater and the turning of the tassels, Superintendent Brent Freeman presented the Class of 2022. 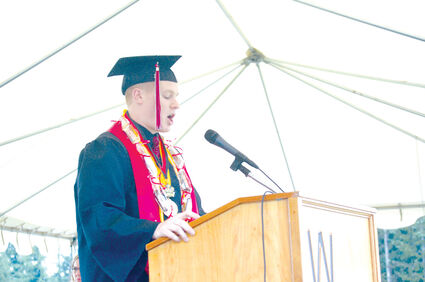 Eight graduated with a GPA of 3.5 or above. Two graduates simultaneously earned their Associates Degree at Lower Columbia College through the Running Start Program. Plans include attendance at the US Naval Academy, Lower Columbia College, Walla Walla Community College, and Eastern Oregon University. One will join the Air Force, while others seek carpenter or electrical apprenticeships, or plan to go to make up school, culinary institutes, or lineman school. Some are headed straight into the workforce.

Excellence in Athletics awards were given to Leitz and Moon.

Activities and Involvement awards were given to Courtney Carlson and Luce.

Citizenship awards were given to Kassandra Hongel and Emerald Niemela.

Leadership awards were given to Josephine Young and Leitz.