New directors take the reins for Chamber of Commerce 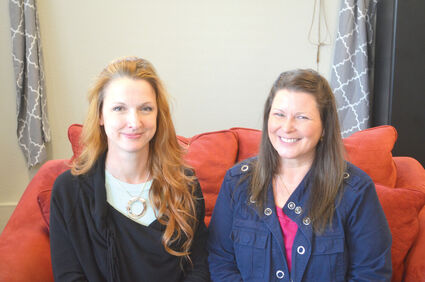 Melissa Collins, left, has joined Monica Budd, right, at the Wahkiakum Chamber of Commerce. Collins is taking on the role of assistant director, as Budd steps into executive director duties.

The Wahkiakum Chamber of Commerce has had a change in leadership, with the former assistant director, Monica Budd stepping into the executive director's shoes and new hire Melissa Collins taking on the assistant director position.

Executive Director Monica Budd joined the chamber last year to focus on event planning. Initially, she wasn't sure she wanted to step into the leadership role when it opened up, but gained some confidence as she realized she was already doing the work.

Budd is a sort of fourth generation Wahkiakum County resident. She is the member of a local family, who was raised in Boring, Ore., and spent many summer days here. She moved to the area when she was 26 to raise her son.

"I always wanted to grow up here, but I didn't get that opportunity," Budd said. "I've been here 27 years now. I love it here."

In recent years, the Chamber split job functions between the executive and assistant positions, with the executive director focused on business matters, and the assist handling event planning.

With Budd at the helm and new hire Melissa Collins stepping in as assistant director, they have decided to go back to their traditional roles, with common goals.

Budd didn't want to completely give up event planning, but she also wanted the assistant to know how to do both jobs. No matter who walks through the door, either one of them can answer any question that comes their way.

"I want there to be a flow," Budd said. "I want us to be a team. I think that's what we're doing. I think we mesh well. She's just a fireball. She brings a lot of great knowledge to the table and has a lot of great experience."

After doing a lot of traveling, she started a career in restaurants, eventually becoming a consultant for people who wanted to open restaurants. Then she was hired by a resort in Belize to design their food and beverage program.

"That was an adventure," Collins said. "And a lot of fun."

She met someone from Wahkiakum County and eventually settled here to raise a family.

"I thought this was a really nice next step for me," Collins said of her new position. "I found myself in all outlets of the resort, working and helping, I learned a lot. I can apply a lot of that, especially the tourism aspect, and helping grow the economy here, and keeping a lot of the hidden gem aspects of this town and county in mind as well."

Collins said that the Chamber is considering ways to increase tourism, including the potential addition of an event in September, a kite festival at Vista Park.

Budd is thinking about grants right now, and has been encouraging all the local businesses to take advantage of what's available. She's also formed a steering committee to focus on bringing businesses to the area and is promoting a survey that can help match businesses with communities.

"I'm learning," Budd said. "I see so much potential for us. This is such a dreamy place for people to come to. I feel like we have a lot to offer."