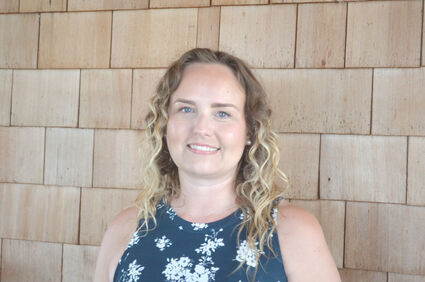 It was life and career experience that led Holly (Graham) McKeen to pursue an education, and now, to seek office as the Wahkiakum County prosecuting attorney.

When she got pregnant, McKeen said, she needed benefits and found work in Cowlitz County in the Office of Public Defense. She worked in the felony division for about seven months, but when she learned that the administrative assistant in her former office was retiring, she returned and took the position, and even took on the role of a deputy coroner.

It was interesting work, she admitted, and she was even able to pick up some experience assisting with a few autopsies in Cowlitz County.

Despite all that, McKeen knew she needed something more.

"I had higher aspirations for myself," McKeen said. "I couldn't picture myself in that position for the next 40 years."

When the city prosecutor's office in Port Angles offered her a job and the financial assistance she needed to earn a four year degree, she headed north. She majored in Applied Management while attending classes online or at night through Peninsula College, which despite being a community college, also offered bachelor's programs.

Meanwhile, there were changes at work that had her handling civil issues instead of criminal ones.

"Ordinances and resolutions for the city council, issues with public works, drafting contracts, formed a transportation benefit district," McKeen said. "I got a lot of really good experience."

Law school was on her mind, but with a family and a husband who was doing shift work as a firefighter, traveling into Seattle to attend school wasn't feasible.

One of her coworkers, a city prosecutor, suggested a law clerk program governed by the Washington State Bar Association.

"I can't do that," McKeen thought. A moment later, she was researching it. Soon, she was actually doing it.

"I was able to work in the city attorney's office, getting practical experience, while studying the same casebooks that were used by the University of Washington," McKeen said.

She met with her tutor each week, essentially following a UW syllabus.

"Instead of going to a class with a bunch of other students who might get called on, I was responsible for every single case," McKeen said. "I couldn't skip class, I couldn't get out of answering something, My tutor gave me the Socratic Method. If I didn't understand something, he helped me understand it. I essentially got a customized, private law school experience."

Before she took the bar exam, McKeen took a job as a licensed legal intern in Clallam County.

"I handled my own case load," she said. "I could take cases to trial, but I couldn't sign orders. It was a very good experience."

McKeen prepped a couple cases for trial, she said, but believes she only took one case to trial at that time.

After she passed the bar exam, McKeen was promoted to deputy prosecutor and has since handled several cases, she said.

Why are you running?

"I want to run because I am the best candidate for the position," McKeen said. "There are not a lot of people who have done all the jobs in the prosecutor's office. Starting from the bottom and working your way up gives you a different perspective than someone who has not served in all the roles. I think it's important because there are so many moving parts to running a prosecutor's office, that in order to be an effective leader, you need to know all those working parts."

"Given my experience, and because I am now a licensed attorney and I have prosecution experience I think I have the whole package," she added.

"My slogan is 'Raising the Bar.' I have always pushed myself," McKeen said. "I am going to push myself in this position to assist the county in a variety of ways. For one, I was looking at an article you wrote about Mr. Bigelow in 2014. He described the job as mostly reactive. I wholeheartedly disagree. My approach in this job is to be proactive. There are a lot of reasons why. I think of an analogy in terms of medicine. Some people go to the doctor when something happens. At that point it's too late, you can only treat the injury or illness. But a lot of people go for preventative medicine because if you do that you can prevent things before they get worse.

"That's what I want to do. I want to work with the county department heads to ensure that they understand the implications of what they are doing, the decisions that they are making so that we don't have a negative impact later on.

"I will also make this job my top priority. I don't have a lot of outside things going on. I will be present in the office all the time. I've talked to some people in the community and some people don't know what the role of the prosecutor is. I think there is something wrong with that. I want to make sure that our citizens know what the prosecutor does, and know what is happening in our prosecutors office, because it affects everybody. It affects how cases our prosecuted, the results of our jury trials."

However, McKeen agrees that the prosecutor's role is reactive in terms of crime.

"One of the other reasons why I'm running," McKeen said, "I didn't think I could ever be a lawyer, I didn't want to take the bar exam because it was scary, I feel like I could be an example for students here at Wahkiakum High School. As elected prosecutor, having graduated from this high school I think I could set an example for the students in our school district that their dreams can come true. You might go about it a different way. I definitely took the path less traveled but I still accomplished my goals."