Artist takes metals in many directions 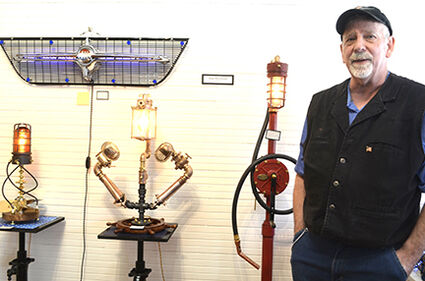 Dan Westlind is the featured artist this month at Tsuga Gallery. He creates steampunk sculptures with found objects and has been forging beautiful knives for years.

Dan Westlind was still a toddler when someone handed him three simple gifts that would set him off on a course of creativity for the rest of his days: A hammer, a can of nails, and pieces of wood from a nearby sawmill.

He started with birdhouses and haphazard sculptures, but they all seemed to find their way to the fireplace.

Perhaps that's why Westlind forges with fire and builds with sturdier stuff: his knives and steampunk sculptures are not so easily disposable.

Years after the hammer, nails, and remnants of wood, the creativity would resurface with knives. Westlind came by it honestly. An uncle who was a logger by trade would spend his winters grinding out planer blades. And each winter, he would produce one knife, eventually given to one of the kids, including Westlind.

Forty years later, he gave it to a cousin.

"I regret that in a way, it was kind of my inspiration," Westlind said. "The thing of it was, I used to do a lot of hunting, and nobody made the perfect hunting knife."

Problem solving, building, creating. He'd spent a lifetime doing that, one way or another, learning his own craft, training apprentices.

So Westlind set about perfecting the hunting knife. He must have done something right, because he got requests every time someone saw one.

"Two years later, I still didn't have my own, Westlind said. "I sold hundreds of them."

Boredom set in. Luckily he found inspiration with another challenge: Damascus blades. He started reading everything he could about them, and with his studies in metallurgy and his degree in welding, it wasn't long before he was experimenting, and learning to make his own.

Westlind struggled, but he figured it out, and eventually he was able to create patterns in the steel, even images of mountains and trees. Whatever he wanted.

The blade is only half the knife. The handle is another opportunity for the artist to express himself.

"When I teach knife making, I tell people you can take a $20 knife handle and a $200 knife blade, and you have a $20 knife," Westlind said. "If you don't do the job right, the knife doesn't look good. The handle has to have the same value as the blade, not monetary value, but skill."

His early instincts were honed with lessons on symmetry and flow, necessary for knives. It translates to his steampunk sculpture as well.

It tells him when he's done with something.

"If you aren't satisfied with something, change it," he said. "Change it until it's done."

The shift into steampunk really took off with an art project involving a door hinge. He played with that door hinge for days before he realized there was something in the movement that reminded him of wings. He cut bird wings from brass, and added a handle to crank that set the door hinge wings nearly into flight.

"The challenge of taking anything and making something cool out of it intrigued me," Westlind said.

He enjoys teaching, and relished working with students at Wahkiakum High School once upon a time, showing them another avenue for creative expression besides drawing or painting.

Westlind used to spend hours adding to his collection of found items that he uses for his steampunk sculptures, but his shop is full, and he isn't bringing much home anymore.

"I have so much stuff," Westlind said. "I doubt I will live long enough to use it all. You change directions, get interested in one thing, get bored with it till something new comes along, and then I have to try that. I'm constantly trying different methods, different things, different materials. There is always new stuff coming out. There are all types of chemicals out there to color different metals with. I'm always experimenting with those to see what kind of colors I can get out of copper, brass, or steel."

He keeps a pen and pencil close to his bed because he can't be sure when inspiration will strike. He's forever pondering creations, and all the problem solving that goes with it has been a great exercise for his mind.

Six years ago, he joined Tsuga Gallery, which was beyond his wildest dreams. This month, he's their featured artist.