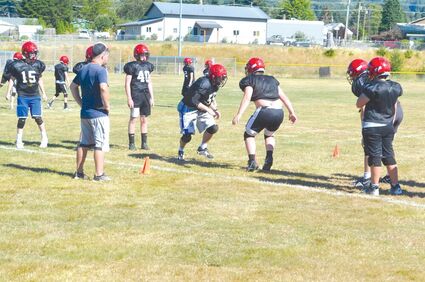 The Wahkiakum Mule football team started practice last week. There are 26 players on the team, with seven seniors returning and six freshmen joining the roster. Their first game is at home against Rainier on Sept. 2.

The 2022 Wahkiakum Mule football team will start their season with more players than last season and a good number of experienced upper classmen.

The Mules start the season with 26 athletes turning out. They started the 2021 season with 17 players and ended with 21, Coach Ryan Lorenzo said. The 2022 group includes seven seniors, eight juniors, five sophomores and six freshmen.

Lorenzo, in his second year as the Mules' head coach, offered the following report of the squad:

"Our team has a lot of new faces that I think will step up and fill the roles quickly. They want to be a great team and are working hard towards that goal!

"We have a very athletic core group of athletes and we are going to try to utilize them all.

"Backs/wide receivers: Brodie Anderson (2nd year senior) is gaining control, composure, and understanding from the conductor seat. Zakk Carlson is stepping up to the position of fullback; he is going to be a tough threat between the tackles. Braden Avalon is a new addition this year at halfback, but he runs like a 4-year senior even though he is a sophomore. Dominic Curl is playing wing back for us. He is going to be tough to defend everywhere on the field. He is starting to figure out he is one of the biggest athletes on the field and we have high hopes for him this year and definitely should be a player to watch. Jacob Johnson gets bored at wide receiver in the wing-T, but our offensive coordinator is drawing up plays to get him more touches in the open field. Tight end this year is going to be senior Tanner Collupy. He flies to his blocks, communicates well with teammates, and does things that you wouldn't expect for his size.

Line: New addition this year is first year quick tackle Allen Smith (6'4" 307lbs.). He moved to Wahkiakum last year half way through the year and decided to play football with us this year; he could be a lineman to watch at the next level. Landon Nielsen and Aimon Lee are playing guards for us. They are both quick and agile for big men. No fear in those two. The other tackle is freshman Cameran Mendez; he showed up to camp and impressed the coaches a lot. He will have a steep learning curve to the speed of high school football, but I think he will develop very quickly! The center this year is senior Logan Nelson; he is a second year player for us and is really being helpful in guiding the middle of the pack with blocking assignments; he understands the offense.

Defense: This linebacker core this year should be fun to watch; lead by Tanner Collupy and Zack Carlson in the middle who are going to fly to the football. They all want to make plays and do not like getting blocked. Grant Wilson is playing safety for us. Jacob Johnson is our corner; last year he played pretty well and this year he should have a heck of a season. The entire defense wants to get to the ball and that's all I can ask for as a defensive coordinator. This year we are working a lot on the basics of tackling and it should transfer well to the games.

"Injured reserve list: Sophomore Mason Curl (starting outside linebacker last year) broke his hand that required surgery before the season started. He is going to travel with the team and if the docotrs give him the go ahead. He is going to get back in the action.

"We are trying to get as many athletes on the field as possible this year. We as coaches learned last year that if we want to make it to the next level we have to have more than 11 players playing in the game. We are going to allow young/new players chances to fight for starting spots. We have about seven core players playing both sides of the ball and we want to get that down to 5-6 as the season goes on. This should create lots of opportunities for younger athletes to step up and get in on the action. Those core players playing both sides are going to get a lot of rest as the games go on with substitutions during games."

The Mules host the Rainier Mountaineers on Sept. 2 to open the season.