Fishing was good; catch--not so much 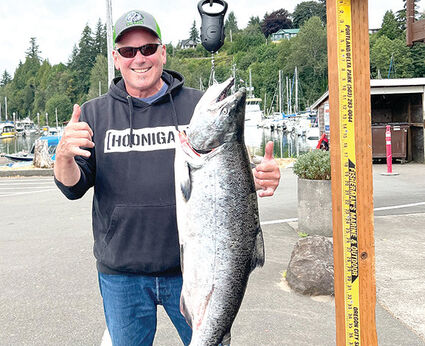 James Fountain won $100 on Friday for the biggest catch of the day. This 19.3 pound salmon was the biggest salmon caught during last week's Hook the Hawg 2 fishing derby, garnering Fountain $475 for first place. Photo by Monica Budd, Wahkiakum Chamber of Commerce.

Fishing is good, I heard a fellow say recently. Catching? He had a very different word for that.

Luckily, fishing was profitable for seven fishermen in last week's Hook the Hawg 2 fishing derby sponsored by the Wahkiakum Chamber of Commerce and Wahkiakum County Port 1. While several people caught a fish, the seven, representing the top 10 percent of the entries, took home some prize money, all of which was generated by entry fees.

There were 70 adult entries and three youths participating for the second Hook the Hawg this year. Unfortunately, the youngsters were unable to haul anything in this time around.

According to Wahkiakum Chamber of Commerce Monica Budd, over half of the entrants were from Wahkiakum County, but the other half came from all over western Washington. A couple from South Dakota even participated in the event. 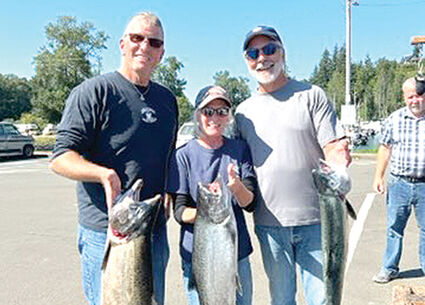 Russ Martin, left, brought in the biggest fish on Thursday, winning $100. On Saturday, he learned that his 18.3 pound fish took second place in the derby, and won another $325. With him are Jill and Doug Martin with their own 10.7 and 7.14 pound salmon, respectively. Photo by Monica Budd, Wahkiakum Chamber of Commerce.

Two youths who were in attendance at the awards ceremony were in the right place at the right time. Hunter Conrad and Landon Orr were given fishing rods donated by Astoria Englund Marine. Mike Nelson won a final drawing for a carrying case with three fishing flashers.

"Overall, I felt it was a huge success even if the fish were not cooperating with us," Budd said. "The participants were fantastic and a pleasure to be around, that is why I love this event so much."