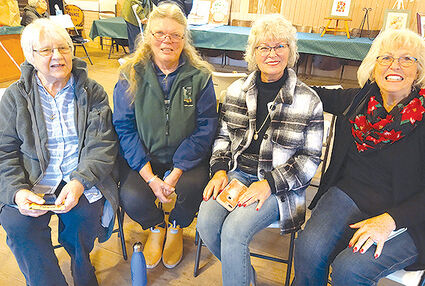 The featured artists for September at Tsuga Gallery are four friends from the Westend, who meet once a week to talk, create, and just enjoy each other's company.

This Saturday, from 3-7 p.m., Tsuga will hold an open house with the four artists, Carol Ervest, Noreen Fitts, Sandra Prucha, and Gail Wahlstrom.

Sandra Prucha is from Vancouver, but she and her husband moved to Rosburg a year and a half ago after finding a long sought after property on the river.

A teacher encouraged Prucha in art class when she was young, but it wasn't until about 2018 or 2019 that she began to take a more serious interest in it.

"I'm self taught," Prucha said, "but I've also attended some online courses where the artist does a painting and you do the painting. I dabble a little bit in everything, if it strikes a mood."

"I've done some still life and different things like that, but I usually go back to landscapes and animals," she said. "I think it's just the things I see and the beauty of it, and trying to catch that permanently. Sunsets and things like that. Trying to bring that to life on canvas. That's a challenge."

She also likes to play a bit, mixing things she sees in the outer world, with images in her mind.

"[Art] makes me feel good, it's a way of expression," Prucha said. "I look at creation, and you see all these different colors, and I think how would I paint this? What colors would I use to get that? It's a challenge, I think. To challenge myself to see what I can come up with that gives a picture of my interpretation of things in nature."

Prucha has been a member of Tsuga Gallery for a little over a year.

Carol Ervest has spent most of her life in Deep River, but it was in 1978, at El Capitan Lodge on the Prince of Wales Island that put her on an artistic path.

"I wish I could paint," Ervest said to a woman, an accomplished artist also visiting the lodge. The woman looked back at her and simply said, "If you want to, you can."

Ervest came home, and thanks to a dedicated coordinator for the continuing education department at Grays Harbor Community College, Ervest was able to take some really good art classes.

A long break from her artistic endeavors came after her husband died in a logging accident, but eventually, she picked it up again.

Acrylic is her current medium, but she fought it for a long time, preferring oil.

"Oil to me is forgiving," Ervest said. "I enjoyed it. Acrylic dries a lot quicker. I know that I won't go to watercolor. Noreen [Fitts] can do that. It seems intimidating to me. I've done just a little and I know that it's not for me."

She needs more time. Which is why she still thinks about going back to oil.

Whatever she's using, it's landscapes that call to her.

"You pay attention to nature," Ervest said. "You look at things and you pick out the colors and the sky is always changing. You look across the way at the trees. There is so much out there. I enjoy it."

Ervest, along with Fitts and Wahlstrom, has been a member of Tsuga since its inception.

Noreen Fitts didn't have time for art. She and her husband, Joel, were dairy farmers, raising four children. It wasn't until the last one left the home that she even considered it.

But 20 years ago, she took some classes and never looked back.

"I always really loved looking at art, especially watercolors," Fitts said. "They kind of fascinated me, but I never really thought about painting myself until I had time. There was a lady here, Melissa Appelo, she was giving lessons, I thought well shoot, now's the time, so I took a lesson from her and I got hooked."

It was the colors that kept her coming back.

"Watercolor is very unpredictable," Fitts said. "You put your paint in the water. Water can do anything. You wet your paper and you add your color, you have kind of an idea where it's going, but it has a mind of it's own and sometimes that's the best thing, happy accidents."

"Boy I have so much I don't know," she continued. "I'm enjoying painting, it's just a little bit of a hobby. I don't do it all that much either. Winter time I paint more than summertime. Summertime I'm out in my flowers or riding my horse outside."

Like most everything she does, she likes seeing the results, though there are many times she prefers to keep the outcome to herself.

"But when you get one you are satisfied with, and think that's nice, you keep looking at it," Fitts said. "I think it's like anything else, you look at your end product and think I did that. The nice feeling of accomplishment. The process is a very nice thing to do too."

Gail Wahlstrom lives in Rosburg, by way of Astoria and Minnesota.

Like Ervest, she uses acrylics. What sets her apart is the canvas she chooses: natural items like birchbark, leaves, gourds, and feathers.

Wahlstrom is self-taught. She grew up in northern Minnesota, about 30 miles from Canada.

"For many months of the year, if you didn't ski or skate, you spent a lot of time indoors," she said. "They had an art colony there, and even at the tender age of 11 or 12, I was able to sneak in and listen and watch and absorb, and they just accepted me. It was exciting to me."

"It was a beautiful place where I grew up, a lot like here with water and trees," Wahlstrom continued. "There was a little mountain behind our home called Little Birch. My mom would tell me to go out and play and I would sneak up there by myself and play, mostly with my colored pencils."

Years later, Wahlstrom would get more serious about it. Eventually she and her husband would have an arts and crafts store in Astoria, and she would teach classes at the college, despite never taking any classes herself.

"I just like the natural things to paint on, because I don't know that I'm that great a painter," she said. "There is different color and texture and it is what offers the beauty of the piece. It isn't so much my painting as the surface. It speaks to me and I have an idea of something I'd like to try. The surface I'm painting on moves the painting along."

One of her favorite artists was Charles Russell.

"I went to his studio once in Montana and there was a piece of birchbark," she said. "He had done a tiny painting on it. I thought oh, how nice, we were kindred spirits all these years, I always knew it."

"The art isn't a chore," Wahlstrom said. "It's something you really need to do. Now that I'm older, I realize there were times I didn't have the time, and I missed it a lot. You just kind of lose yourself in it. Just sit down for a while, with your glass of water and your paint brush, and all the sudden it just happens."

"I love the girls that I paint with," she said of Fitts, Prucha, and Ervest. "We're close enough that we are like sisters. It's a really wonderful time when we get together. We do it once a week. I long for that day, to have time with them. It's a gift."