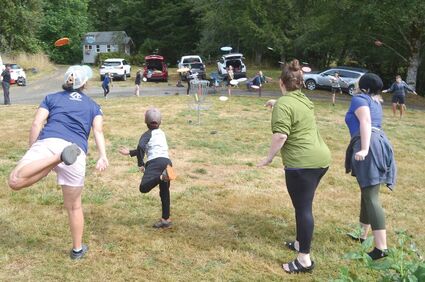 Disc golf in action: It rained discs in the Ring of Fire, where all the competitors circle the basket to see who can get their disc in and win a prize.

A couple dozen golfers traveled from all over the region to the course at Lucky Mud in Skamokawa on Saturday to compete in the final match of the Battle of the Chain Maidens, a Professional Disc Golf Association women only series that took place this year.

"It's akin to a state championship," Adam Fletcher said. Fletcher and his wife, Sara, run the disc golf course at Lucky Mud, and are avid disc golfers themselves. Sara was playing on Saturday as well.

Each competitor in the summer series got points for each match they attended, and points for play. At the end of the series, all those numbers would be added up, and a champion would be named.

The top purse of $370 went to Madison Tomaino, who hit two under par at Lucky Mud this weekend.

Saturday's event was the 100th PDGA tournament for Jody Dixon of Ravensdale, who has been playing the sport for 10 years.

"I've always loved playing frisbee, like catch," Dixon said. "My husband and I, we actually came up with the idea of disc golf. So we invented it."

Dixon's friend, Jennifer Rice of Edmonds, who has been playing for four years, started laughing.

See, here's the thing. Disc golf is fun, but the friendships, the laughter, and the ribbing might be even better.

And in this case, maybe the tall tales too. 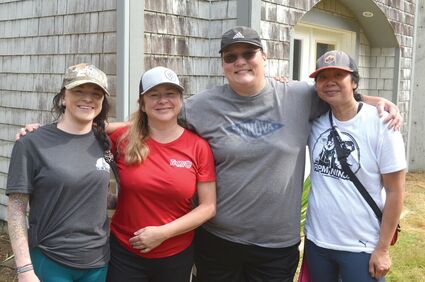 They love coming to Lucky Mud. Left to right, Olivia Demkier of Vancouver, Jody Dixon of Ravensdale, Jennifer Rice of Edmonds, and Pek In of Edmonds. Demkier traveled to Skamokawa to support her mom, Dixon, who has been playing disc golf for 10 years. In has been playing even longer, at 17 years, and Rice, who took up the sport four years ago, won $185 in the tournament on Saturday.

"Because we were playing catch all the time," Dixon continued, "so we were like, hey, let's see who can get to that tree fastest by throwing the fewest throws. So we came up with the idea of disc golf before, you know, this became a huge hit."

She admitted that her brother-in-law later informed them there was actually a sport. She's been competing ever since.

Rice, Dixon and her daughter, Olivia Demkier, of Vancouver, who was there to support her mother, all love coming to Lucky Mud.

"This is the best place," Dixon said. "I love this course."

When I asked Pek In of Edmonds how long she's been playing, she said, "too long to not be better."

She finally admitted to playing the sport for 17 years.

"So you actually invented disc golf," I said.

I could hear Dixon in the background, laughing.

To be fair, the sport is much older than either In or Dixon, but it's definitely keeping them young.