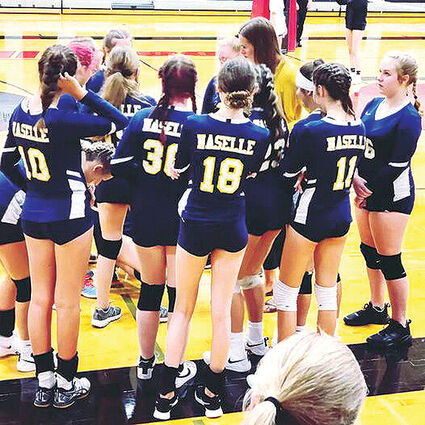 At the recent meeting of the Naselle/Grays River Valley School Board, Rob Dalton, teacher at Naselle High School congratulated the volleyball coaches, Haleigh See and Sylvia Hoagland for coaching these girls, writing personal cards to them, and helping build such a great volleyball program. Photo from facebook.

On Tuesday, September 20, the Naselle/GR Valley School Board had its first business meeting of the school year. One empty chair was immediately noticeable. Last spring, Chairman Chuck Hendrickson resigned from the Board after eight years of service and leadership. Superintendent Lisa Nelson acknowledged the loss by speaking of the hard work Chuck had done for the school and the board. Others on the board mentioned that his commitment to the school was extraordinary and deeply appreciated.

After the first business items on the agenda were completed, and appreciation was expressed for Chuck's time on the board, a new member was chosen to serve on the board for Area #3. Three applicants applied: Aris Campbell, Clarissa Coulson and Luke Gardner. The group was interviewed together by the board during the meeting, then the board went into a short executive session to discuss the qualifications of the applicants. When the board returned, Amy Hunt, chair, thanked all the applicants for applying. Tyson Vogeler made a motion to appoint Aris Campbell to the open seat. After a second and ensuing discussion, a roll call vote was taken, with the four current board members each voting "aye."

Amy Hunt commented, "We wanted someone who can be involved with the school." Lonnie Eaton then thanked the applicants for applying and commented, "Each of the applicants has his/her strengths. One stood out more than the others." Lisa Nelson also stated, "This was an impressive group of applicants."

Mr. Campbell was sworn in as the new member. He quickly took his seat and joined in the meeting, immediately going to work. This reporter will interview the Campbell family next week and provide more information on Mr. Campbell and his family in the next issue of The Eagle.

There were no public comments made so the board went into personnel actions. The resignation of Summer Johnson, Knowledge Bowl coach was acknowledged with appreciation expressed for her work and the resignation of David King brought appreciation comments for his many years of teaching. The hiring of Warren Wirkkala as MS football coach was approved, pending background check.

Several policies were adopted as follows: 1400 Board Meetings, Meeting Conduct, Order of Business and Quorum; 1420 Proposed Agenda and Consent Agenda; 3122 Excused and Unexcused Absences; 3432 Emergencies; 4218 Language Access; 5001 Hiring of Retired School Employees; 5011 Sexual Harassment of District Staff Prohibited; and 6214 Purchasing cards. The board then voted to adopt two resolutions: 2022-9-20 Board Director boundaries remain unchanged after public input and 2022-9-20b. Use of purchase cards and agreement with the Bank of Montreal.

New Business included approving the Superintendent's Goals for 2022-2023. Other items of approval were fuel bids from Ferrell Gas and Wilcox and Flegel. Also approved were out of area teaching assignments for the following teachers: Updike, See, Olson, Hoagland, Teubner, Baker, and Johnson.

Principal Justin Laine showed a power point presenting an overview of last spring's test scores and strategies for improvement. His goal is to raise test scores and to recover from the learning loss over the past two years due to covid. He also reported on various programs for the new school year, including some newly added programs such as the Career Connect Washington State Project. This includes Wahkiakum 4-H work and the WSU Extension program and the STEM Robotics Liaison.

Superintendent Lisa Nelson's report included information from the Recreation Conservation Office, reporting that the Naselle/GR Valley application for funding for renovating the fields at Lions' Park was rated #1 in the small grant category. If the Legislature appropriates the funding, the grant will total $90,000, which includes leveling, dirt work and reseeding the outfields. The current enrollment this September is at 300, showing an increase over last June's enrollment of 289.

A lengthy discussion was held at the end of the meeting regarding the district's web site, as well as options for developing clear steps for the public to download policies. Technology Director, Karl Johnson reviewed several aspects of the site. No final decision was made at the meeting.

The next meeting of the Naselle/Grays River Valley School Board will be on Tuesday, October 18 at 6:30 p.m., in the middle school commons.