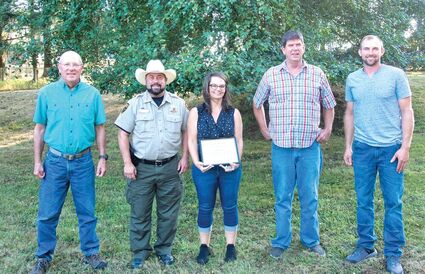 Last Tuesday, the Wahkiakum County Sheriff's Office and Wahkiakum County Port 2 recognized Tina Boyd, for her bravery on August 6, when she put herself in harms way to save a stranger's life at Vista Park.

Boyd, who lives in Vancouver, was camping that weekend in August with her boyfriend. It was a spur of the moment decision, and they were feeling lucky that they were able to secure a spot that had just become available at the busy campground.

The pair went to the beach on Saturday morning with their dog to watch the Hobie Cat races.

"It was a beautiful day and a very rare day when there was not a breeze on the beach," Port 2 Manager Sam Shogren said.

He was at the beach taking pictures of the speedy catamarans and talking to the enthusiasts who have been coming to Skamokawa every summer since 1981 to race.

Farther down the beach, Boyd and her boyfriend picked a spot in the sand between a family setting up fishing lines, and a group of kids.

"We were down there for a little while," Boyd said. "All the sudden we could see some kind of commotion."

They weren't sure what was going on, and they didn't understand their neighbors, who spoke Spanish. It just looked like three young men were playing and splashing in the water.

Suddenly, Boyd and her boyfriend realized that wasn't right. The young men were in trouble.

She asked a man at the beach if they needed help. He said yes.

"Without even a blink of an eye, I just darted out into the water," Boyd said. "As I was running out, I tried to ask who needed help and they pointed at one gentleman. My boyfriend doesn't swim at all, so he got on the phone and dialed 911."

"We were pretty much at low tide," Shogren said, "so there was not as much distance between the edge of the beach and where the shipping channel is. I think the general impression is that they probably reached a point where they reached the dredge line, and it goes to 45 feet in a long step, and they'd hit that spot."

"We think they were just playing in the water and didn't realize the 'deep end' was a little closer than normal," Boyd said. "And I don't know that any of them could swim."

Boyd, who is 47, received lifeguard training as a young teen when she was living in Kennewick and working at a public pool in the Tri-cities.

"I was young," Boyd said. "I've been a swimmer since I was two. I've never really had a fear of water until maybe just now. I've always been in the water, playing and having fun. Usually when I work out, I try to swim laps afterwards."

Fortunately, some of the training she received during that brief stint at the public pool stayed with her. It saved one young man's life on August 6, and her own.

"I was trying to get around him so I could try to grab first," Boyd said. "All I just remember is swimming out there, and when I tried to get around him, he turned and grabbed me, basically wrapped his feet around my back."

She thought they would have to go underwater and swim about six or seven big strokes before they got to a spot where they could touch the ground. When she started to swim, the young man, who was already in panic mode, started to choke her. She had to come up for air sooner than expected to release his hands.

She hoped he would understand they would have to do it again. She tried but they didn't get very far.

"He started choking even harder," Boyd said. "We were sinking and not moving forward."

Boyd started to panic a little too. He wouldn't release his hands, and she struggled underwater to get his feet to release.

"I knew we weren't going anywhere but down," she said.

When she was finally able to release his hands from her throat, she also realized that if she let him go completely, he would sink.

"He was thin and couldn't swim, and was already struggling," Boyd said.

So she turned over and kicked him as hard as she could toward the surface of the water.

A sea kayaker was there to meet him. The young man was able to grab the front of the boat and head to shore, where he was reunited with his friends and family.

Boyd headed in the same direction, but people on the beach were screaming that there were still two more swimmers in the water. She turned to search, but volunteers arrived in the safety boats that were at Vista Park to assist with the Hobie Cat races and they were looking, diving in the water to try to find the two other swimmers, who never surfaced again.

Exhausted, and struggling to breathe because the frightened young man had had such a grip on her throat, Boyd returned to shore.

"She, without thinking about risk to herself, and without having any personal flotation device on went out after them," Shogren said. "She went under three times. Tina put herself in harms way to save a person. It's just what needed to be done."

"It's a miracle she's here, frankly," he added. "Just as all this was happening, one of the large freighters was coming down and passed the beach. There's lots of currents. Even though the water looks still off Vista Park, there is a lot of stuff going on underneath. Having a ship go by just adds to the current and the danger."

"Hearing about how she didn't even hesitate and jumped in the water," Wahkiakum County Sheriff Mark Howie said, "knowing how dangerous it is in the Columbia River, and hearing the story, I was just blown away. She swam out there, in the channel. Even the best of swimmers can barely fight that current, and especially with somebody who is drowning and trying to hang on to you. Any human being that goes out of their way like that, risks their own life, deserves some recognition. To save the life of another human being you don't even know."

Boyd and Howie also praised staff at Vista Park and all the emergency responders.

"That day and the subsequent week was hard for the family and the friends, but it was difficult for everyone that was involved," Howie said. "I was very impressed the Vista Park staff handled everything, the professionalism and the way they were receptive to honoring the family and allowing them to come out there every day in a big group was really great of them."

"The campgrounds were amazing," Boyd said. "The rescue team, all of them, they were all great to us."

"I was fairly young when I lifeguarded, so I don't know that it was really major training, and nothing happened that summer, but they don't teach you for this kind of experience," she said. "The Columbia River, the channel, it didn't dawn on me. I didn't even say anything to my boyfriend, I just left my seat and ran."

"It's hard to feel like you are a hero in anyway, it was still a tragedy that day," Boyd said. "Like nothing I'd ever experienced."

"I don't know if I'd have done anything different," she added. "I know now going into things I'd have to think about things again. You tend to forget the people who panic, and the people who try to save them end up drowning together. We were both very lucky in that respect."