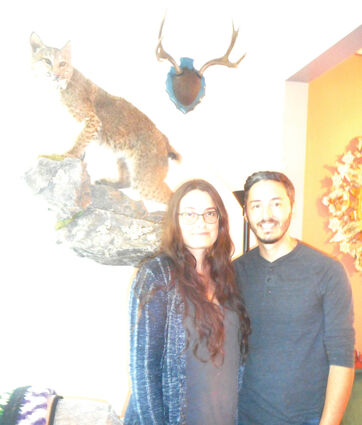 New Naselle/Grays River Valley School Board member Aris Campbell, right, and wife, Megan, stand under a bobcat she preserved as a taxidermist.

Aris Campbell joined the school board officially at the last school board meeting. Later, he agreed to meet with me at his home where he, his wife, Megan and their two young children live on Upper Naselle Road. Both are working from home on-line as graphic designers. Aris attended Portland State studying psychology. Megan lived in Portland for 20 years and trained for graphic design. Aris wanted to come back to Naselle because of childhood memories of his grandparents, Francis and Lloyd Johnson. They owned the meat locker in Naselle and later, a butcher shop in Astoria. So they are coming home rather than moving in as "newcomers." They attended Emily and Randy Lindstrom's wedding, and they feel at home in Naselle after being here for about a year.

Aris is an impressive young man with experience and a thoughtful perspective. He will work well with the other school board members. Their children are in their first years of school, kindergarten and first grade, so his interest in their school comes naturally. When asked what his main goal is for being on the school board, he said, "To foster cooperation." He states he is open to all discussions because to him, "that's the only way to move forward. I am excited to be on the board. I believe I can bring a unique perspective. It is important for me to make sure my kids, and all kids, get the best educational opportunities."

Megan, Aris' wife, brings a new skill to the area. She is a licensed taxidermist who can preserve the skins of large animals, fish and birds. It was fun to see her products on the walls of their home. She is legal for ducks, birds, fish and small animals. She also will work with folks who have lost a cat or dog. "Many folks," she told me, "Have the skull or paws of their animals done to place beside a photo of that pet." At the top left in the photo of the Campbells, you will see a beautiful bobcat standing on rocks she also made. Her office has a very impressive pheasant on the wall. Recently, the couple built a new shop behind their house where she will do her taxidermy work. The name of her business is "Beast Wishes Taxidermy." Her website is: beastwishestaxidermy.com and her phone is (360) 489-6669.

This is a young couple with very young children who have moved to our area and want to invest in their future and their children's education here. If you would like to talk with Aris personally, his cell phone is (503) 970-4323.