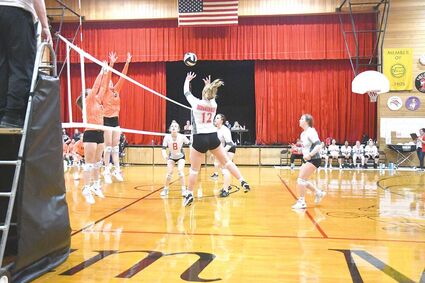 Lady Mule Reigha Niemeyer pushes the ball over the hands of Napavine blockers.

The Wahkiakum Mules volleyball team split games this week, winning one on the road and losing one at home to bring their overall record to 4-5, and 1-1 in league play.

"Ava Thomas had a great game at the service line with five aces and she chipped in one kill," Coach Kayli Hurley said. "Genevieve Fleming put up a couple of stuff blocks and showed big improvement at the net. Breyonna Montgomery had 17 assists and five aces. Helen Lewis had three aces and a couple digs. Reigha Niemeyer had 11 kills and strong serve receive and Nyomie Kuljis came in with some big serves including an ace." 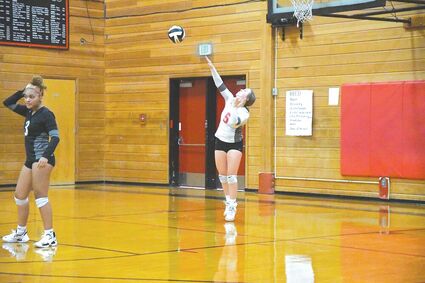 Miya Kerstetter serves the ball for the Lady Mules.

"Aside from the first set it was a fun and intense match," Coach Hurley said. "We worked hard to come back from deficits for most of the match. My girls never gave up. Napavine has a couple of pretty big offensive threats and we had to make some adjustments to try to slow that down."

Hurley said that Thomas had a great serving game and Lewis was aggressive at the net. Niemeyer had nine kills and seven digs. Miya Kerstetter added six kills. Fleming had two stuff blocks and lots of blocking touches, and Amirah Abdul Kariem had five digs and was 100 percent from the serving line.

Wahkiakum took on Hudson Bay in Vancouver on Wednesday, but the score was not available by press time.

The team hosts Rainier today (Thursday) and travel to Toledo on Tuesday.