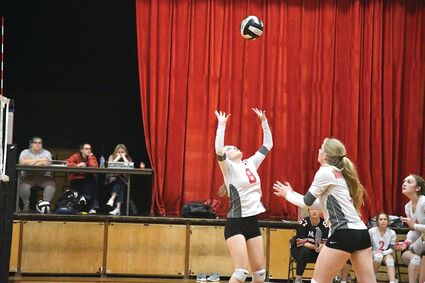 Breyonna Montgomery sets the ball for the Mules.

The Wahkiakum Mules volleyball team lost two games at home this week, bringing their record to 2-4 in league and 5-8 overall.

"We started out with tons of energy that slowly petered off as the match progressed," Coach Kayli Hurley said. 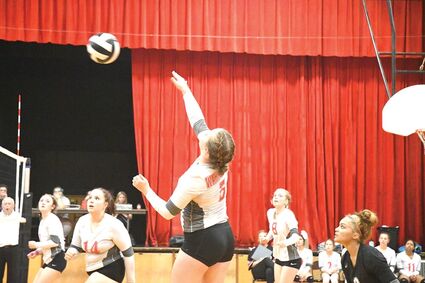 Miya Kerstetter makes a hit for the Mules.

"We flat out did not show up to play tonight," Coach Hurley said. "A shred of hope showed itself during the second set, and I thought we were pulling out of it, but no. We were plagued with unforced errors due to a lack of focus. My bench was fire though. They are so awesome and selfless."

"Hopefully we can put tonight's lessons in our pockets and move forward with success," she added.

Niemeyer and Lewis had two kills each and Kerstetter had three aces.

The Lady Mules travel to Winlock today (Thursday). Their regular season ends next week with a home game on Monday against Kalama and an away game on Wednesday with Morton/White Pass.